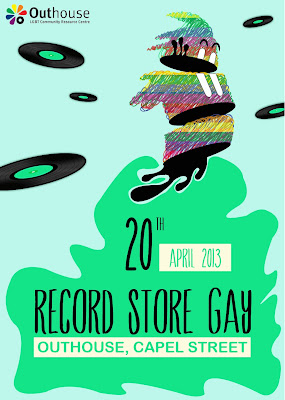 
Entry to events, which begin at the early time of 12pm continuing on until 8pm, is absolutely FREE but donations are welcome with all contributions going to The Outhouse. The party won't stop there though with more live Performances & DJ sets scheduled into the late hours for Pantibar from 7pm.

The current list of artists/bands confirmed for April 20th:

If that's not fun enough (you dullards), then I am delighted to confirm the official Record Store Gay soundtrack is also set to return this year but the full list of titles is being kept under wraps so I won't spoil the surprise but I can share one of the titles. Take a listen to Patrick Kelleher's RSG version of 'Smalltown Boy'.