This Is The Kit: Full Irish tour announcement 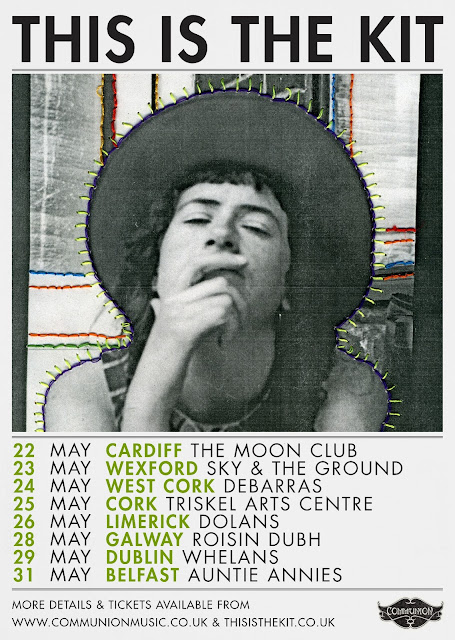 This Is The Kit announce full tour of Ireland...

Having announced the Cork leg of the tour quite some time ago, it has been confirmed that This Is The Kit will play a number of shows in Ireland including a G-Man Presents... date on Saturday, May 25th in the Triskel Art Centre's TDC. The auditorium wing of the incredibly impressive Triskel Art Centre complex will house the Paris/London based indie-folksters led of course by songwriter Kate Stables with tickets onsale over on TicketFriend.com.

The folkie collective known as Communion (The Staves, Daughter etc.) will oversee the tour in general. The official pressy thing reads below:


Communion are thrilled to announce debut Irish tour for This Is The Kit.
The dates come in celebration of their recent appearance on Ireland’s Other Voices television program, curated by Aaron Dessner of The National. Dessner is also working with the band to produce the follow-up album to Wriggle Out the Restless, recently reissued by Aaron’s label Brassland. The band will kick off the tour with a Cardiff show at The Moon Club on May 22nd before crossing over to the Emerald Isle where they will play seven dates across some of Ireland's most popular venues.

"Absolutely gorgeous, like an aural bath with the warm water lapping over you"
Cerys Matthews, BBC 6music

This Is The Kit is the much beloved musical project of Kate Stables, born in England and based in Paris, though the heart of their musical community remains in Bristol, UK. Kate sings, plays guitar and banjo while a cast of carefully hand-plucked friends deliver guitar strums, hushed horns and electronic textures that sit beneath Stables’ easy, earnest lilt. Her long-time collaborator and regular live companion Jesse Vernon produced the album and contributes guitars, violin and orchestral arrangements. While on tour, This Is The Kit is a shape shifting entity ranging from a female duo with friend Rozi Plain to a psychedelia tinged five electric five-piece.

"The aim is to have fun playing with people whose work I really like," says Kate in her simple and direct fashion. "The more you exchange and share with people the better things get and the more you learn." This is the Kit has or will be opening for artists such as Jose Gonzales, Jeffrey Lewis, The National, Alexi Murdoch, Iron & Wine and Jolie Holland, and was recently selected by Sharon Van Etten as her “Favourite New Artist” in an interview with Pitchfork.


For more on This Is The Kit visit:

Communion G-Man Presents Gig This Is The Kit Triskel