The third The G-Man Presents... show of 2013 took shelter on a wicked tempest of a night beneath the warm and welcoming roof of The Pavilion on Carey's Lane. Thankfully, the unrelenting rain and wind were soon distant memories about as both Une Pipe and We Arrive Alive blazed their way through blistering sets. Friday night happened to be both We Arrive Alive's first headline show outside of Dublin and the official Cork launch of One, the first instalment in a trio of releases to be made over the coming year or so. Pick up a copy of the album, which comes in the form of a gorgeously-gothic illustrated booklet complete with individual download code, that can now be purchased in Plugd Records on Tobin Street. Une Pipe announced on the night that they have their own release in the offing and, after an exhilarating performance that can only be described as incendiary, my gut feeling tells me their official début will be nothing short of special. The blog will be updated as soon as I know more.

Huge thanks to The Pavilion, Steve-O for sound, Simone Della Fornace for the photos below, Pretty Handsome for another joy of a poster design, Aisling O'Riordan for the incredible amount of work she does and her all-round amazingness, everyone for coming and of course to both bands who will hopefully appear on future G-Man Presents... bills in the future. 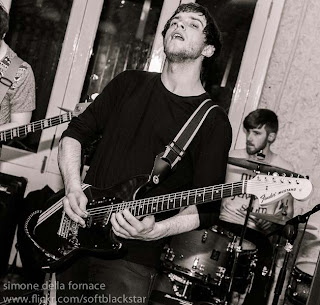 To stream We Arrive Alive's newly released record One, simply press play on the player below.

For more on We Arrive Alive visit:

For more on Une Pipe visit:

The next The G-Man Presents... show is Angel Olsen with special guest Cal Folger Day in Half Moon Theatre, Cork on 3rd May. Purchase tickets from Plugd Records or Cork Opera House box office.