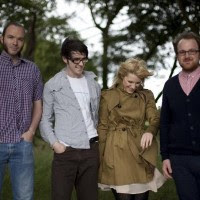 Last words from the moon...

Following the sad news of the impending demise of Dublin indie-pop sparklers Hello Moon, "the non-singing non-drumming" Alan of the band (there are two, with the quartet completed by Amanda and Eamon) was on hand for a quick chat ahead of both the band's final release and gig. 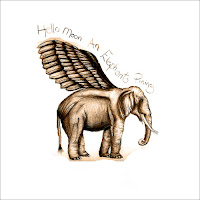 The G-Man: So is it true, Hello Moon are calling it a day?
Alan (Hello Moon): Yes it is true.

Any particular reason?
Eamon is emigrating to Canada in September so it didn't feel right going on without him. No doubt the four of us will find ourselves involved in some new music venture or other in the future.

Tell us about the new EP.
It's called An Elephant Pining. Six typically Hello Moon sounding, jangly, chime-y pop songs. We're releasing it through Any Other City Records as a limited download/t-shirt package on 31st May.

Were you all aware of the fact this would be your last recording together as Hello Moon?
No we weren't at all. Eamon only made his mind up to leave the country towards the end of recording. The last year was a pretty busy year for all of us in our personal lives with new jobs, losing jobs, college exams/projects etc. so as always the band was a welcome relief from all of that. The general vibe was just the four of us hanging out in Eamon's apartment in the evenings enjoying writing and recording music together with no set plan of it ending up as an album or an EP or anything. We're glad now to have something there, finished before we go our separate ways. 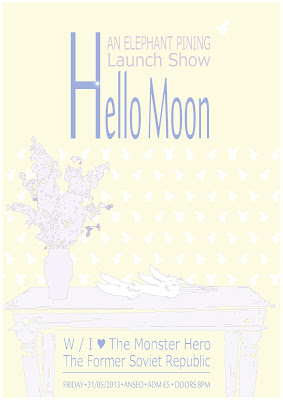 Will there be a last hurrah show to celebrate the end?
Yep for sure. Hefty Horse will be hosting a show in Anseo on the night of the release, Friday 31st May. Looking forward to it.

What friends will be joining you on the night?
Really happy that I ♥ The Monster Hero and The Former Soviet Republic are playing. They're all good guys that we became friends with through Hello Moon so it's nice to have them play at our last show. They both sound incredible too.

What have you found out about each other during your years together?
Eamon is a tickler for organisation - lists, charts, itineraries. Dolly Parton is one of Amanda's all time heroes. Al has an unusual and fanatical fondness for musicals.


Favourite ever gig?
One of my favourite gigs was in the old Shebeen Chic. It was hot and dangerously over crowded. We played all our songs about twice as fast as usual and I remember there was a steady stream of sweat splashing off my keyboard as I played. Fun night. On the back of that gig we were asked to play the Eurosonic festival in Groningen.

Oddest ever gig?
Odd in that it was not the typical gig set up when we provided the interval music for The School Of Life's event last summer in the beautiful Pepper Canister Church. We felt slightly out of place in the company of writers and philosophers and broadcasters like Alain de Botton, Philippa Perry and John-Paul Flintoff.

Most interesting festival memory?
Right after playing a pretty overwhelming and nerve wracking set at Eurosonic to a big room full of European promoters, bookers, journalists and all sorts we had to rush over to a radio studio down the street where Amanda and Al were doing an interview and Eamon and I were asked to stand outside the room because we were having a major giggle fit. Totally not pro.

Most memorable band experience?
Releasing our first album Only Count The Sunny Hours.

One thing you will miss least about being a touring band?
I'd say the smelly vans, late nights/early mornings, empty venues, all those things make it all the more rewarding and worthwhile when things come good.

Top three loveliest Hello Moon memories?
After sound check at the Pepper Canister Church gig, the four of us sitting on the canal in the sun eating homemade brownies for Amanda's birthday.

Never ending games of trying to out-pun each other when in planes, trains and vans. We can be pretty irritating to travel with.

Opening for Teenage Fanclub, who we love, was probably our first proper 'big' gig. Just hanging out before hand nervous, giddy not sure what to expect and then seeing Norman Blake bopping away to the side when we were playing.

Which part of being in Hello Moon are you most proud of?
Simply when someone tells you how much they like listening to your songs, that makes me proud.

For more on Hello Moon visit: