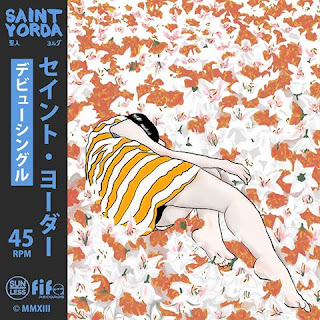 As the name suggests, the new single from Cork trio Saint Yorda sees a shift in favour of dancefloor dudes and dudettes, tending more towards surf-rock whilst respectfully retaining the drone-pop charms of the intoxicating 'Yr Bones' and 'Death Ray', as heard on 2011's collection and the not-really-the-title-but-its-the-title-anyway: some songs that we recorded with cathal.

Electro kettle drums dance the first beats of 'Disco' into our earholes, with the FIFA single relentless until the final frothing crescendo. As he regularly does live, Chris Somers (Grave Lanterns/Elastic Sleep) cameos behind the kit in what is another giant leap forward in Saint Yorda's musical evolution since they appeared on the Cork scene circa 2011. They blew me away as support for Low - recap here - and 'DISCO' continues where they left off: creating quality pop tunes, if of a different ilk as is traditional for local dancefloors. Watch the Sunless Design-shot video for 'Disco' in all its land of the rising sun-loving glory below.


For more on Saint Yorda visit: