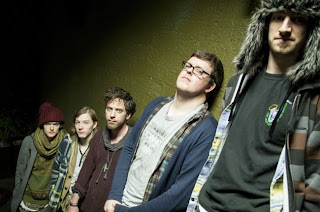 The Vincent(s) step forth from the shade...

Following an exclusive stream of début single 'Asked Her To The Dance' on this very blog back in February, psych-pop pack The Vincent(s) return with 'Valley of the Sun', the band's first EP. Opener 'Who's That Boy' stomps like a doomed circus troupe raised from the grave, the grisly face-paint almost tangible on the tongue as the deathly organ swirls about the ringleader's roiling rasp. Scooping a megaphone to hand, Margus Charles Allen's introductory bark transforms to more of an incantation or call to arms on the title track, beckoning the townsfolk to follow him pied-piper style towards the mystical 'Valley of the Sun'. Whilst retaining the charge forth, 'Summer Song' shifts to a more radio-friendly beat - complete with the bass hook of the Summer - with Aisling O'Riordan's angry angel cameo the perfect foil for Allen's restrained lament:


"Summer is here/Winter is gone/All of our friends/Are already dead."
The juggernaut assault, temporarily rerouted, resumes on 'Milk With Tea', a tip of the cap to grungier times before the chain-gang charged 'Song For The Sea' loads another bullet in Cork's current revolver of impressive 2013 releases following excellent releases from The Altered Hours, Saint Yorda and John Blek & The Rats. Although this should really apply to all new music, I strongly recommend either picking up a copy of the CD upon release or at least make use of the high quality download option to avail of the sonic treats exhibited on the record not to mention an impressive vocal performance from Margus Charles Allen.

For more on The Vincent(s) visit: