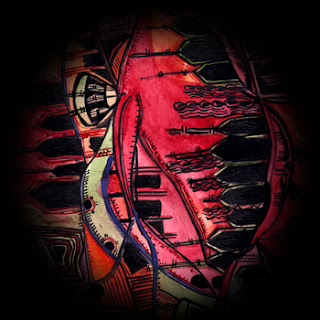 Quite a lot of news and happenings from Ireland's most relaxed city in recent months so a little bit of a recap is required to report the what's what from Galway. Although I don't get to visit much, there will always be a fondness in my heart for the western wonderland, even more so in recent times with Yawning Chasm and The Depravations both travelling south for G-Man Presents... shows.


Cogar
Galwegian composer, cellist, singer and all-round creator of aural delights Cogar released The Hands back in June, a five-track EP of Irish folkie classical loveliness (albeit quite dark in spots) that grows and grows with every listen. The beautiful 'Sleep' is a stand-out.


For more on Cogar visit:


Bandcamp -- Facebook
************************************
Gorges
Unveiled in July, Our throats, like valleys is a collaboration between Brigid Power-Ryce, David Colohan and Declan Kelly under the working title Gorges. Released on cassette by Kelly's recently formed Abandon Reason, a radio show that has evolved into a full fledged record label, the work - recorded subterraneously using an abandoned car park - "is the product of a series of exploratory improvisations with dual harmonium drones, cacophonous trombone and horn blasts and soaring, wordless vocals made between April and December 2012. Listen to the recordings in full below.


For more on Gorges visit:

Bandcamp
************************************
Brigid Power Ryce
Speaking of BPR, the enchanting one has a release of her own with Eee Tuts being released into the virtual wilds as of 28th August 2013. Also an accomplished artist, Power-Ryce has made the five-track EP - featuring an enthralling version of Dominic Behan's 'The Auld Triangle' (but 'Tiny You & Me' is the stand-out for me) - available as an A3 art print that comes with a download code.

"I should probably explain what 'Eee Tuts' means. It was my 2 year old son's phrase for almost everything. 'eee toots, tuts, tooooots, tutz' He has sadly stopped saying it now so I figured I would name the EP 'eee tuts' so I would remember his little phrase, as it is easy to forget the cute things they come out with when they're almost a constant."
Brigid Power-Ryce


For more on Brigid Power-Ryce visit: