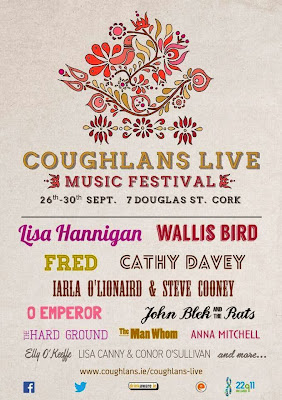 Nearly a year to the day since the inaugural Coughlan's Music Festival back in September 2012, the still relatively fresh-faced music venue on Douglas Street returns with another full weekend of music involving some of Cork and Ireland's finest musicians. For the full low-down on this weekend's festival, including running times, order etc. CLICK HERE.


Use the player below to stream a special Coughlan's Live playlist.

Thursday evening also sees the return of the highly divisive, corporate marketing extravaganza that is Arthur's Day. With destination venues a confidential matter until 5.59pm on the big day itself, fans of Janelle Monae, Bobby Womack, Manic Street Preachers and the other capitalised big hitters face an agonizing squirm through the next three and a bit days, rifling through the rampant rumour mill, hoping to catch a sniff of where their favourite performers are due to play. It does seem Diageo and co. have made a more conscious effort - albeit in response to a backlash of scorn following last year's events - to increase the number of independent Irish bands involved with the likes of Bouts, Girl Band and Le Galaxie all featured on this year's headline page.

Hauling ass all the way back to the beginning of the week, local punk-popsters When Good Pets Go Bad depart for the main stage in the sky as they bid farewell - at least to their current form - with a Castle Street appearance as support for Killarney fivesome Handsome Men's Club in The Roundy. This one's on Monday and may require ear-plugs.

Friday, 27th September
- King Bong, Shardbourne, Astralnaut and Five Will Die in Bradley's of Barrack Street
- Coughlan's Festival: Wallis Bird, The Man Whom and O Emperor in Coughlan's
- Later With The Grunts in The Roundy
- Freddie White in Triskel Christchurch
- John Smith and Ruairri Joseph in The White Horse (Ballincollig)