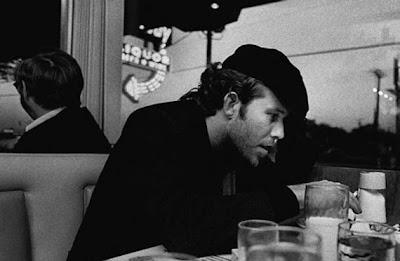 Don't come much better than this...

The last few nights have been a bit lonesome in the G-partment (I have to get over this G-Man thing don't I?) so it's been me and Lowside of the Road: a Life of Tom Waits tucked up with a packet of biscuits on the couch as my physical rehabilitation following August's over-eager festival excursions continues. As I type I'm about 200 pages in, i.e. 1978, with the original king of the gutter having just released Blue Valentine, the record that would mark the Californian storyteller evolve from the more clean-cut balladeer to the champion of the dirty and downright odd. A fitting send-off then that the same sessions would give birth to 'Kentucky Avenue', possibly the man's most perfect ballad, a song that Waits would confess was maybe a mistake as it let that legendary mask of mystique slip a little too far in his autobiographical ode to childhood innocence. It's also the song that converted me from afar admirer to kool-aid gulping disciple with the bottom lip still vulnerable to a quiver at the line: "I'll steal a hacksaw from my dad And cut the braces off your legs". Not exactly a song to be listening to when you're home alone and feeling sorry for yourself.


Eddie Grace's Buick got four bullet holes in the side,
Charlie Delisle sittin' at the top of an avocado tree.
Mrs. Storm'll stab you with a steak knife if you step on her lawn.
I got a half pack of Lucky Strikes, man, come along with me!
Let's fill our pockets with macadamia nuts, then go over to Bobby Goodmanson's and jump off the roof!
Hilda plays strip poker and her mama's across the street,
Joey Navinski says she put her tongue in his mouth!
Dicky Faulkner's got a switchblade and some gooseneck risers that eucalyptus is a hunchback,
There's a wind up from the south!
Let me tie you up with kite string and I'll show you the scabs on my knee!
Watch out for the broken glass, put your shoes and socks on and come along with me!
Let's follow that fire truck
I think your house is burnin' down!
Then go down to the hobo jungle
And kill some rattlesnakes with a trowel!
We'll break all the windows in the old Anderson place
And steal a bunch of boysenberrys
And smear 'em on our face!
I'll get a dollar from my mamas purse
And buy that skull and crossbones ring
And you can wear it around your neck
On an old piece of string
Then we'll spit on Ronnie Arnold
And flip him the bird
And slash the tires on the school bus
Now don't say a word!
I'll take a rusty nail
And scratch your initials on my arm
And I'll show you how to sneak up
On the roof of the drugstore
Take the spokes from your wheelchair
And a magpies wings
And tie 'em to your shoulders and your feet!
I'll steal a hacksaw from my dad
And cut the braces off your legs
And we'll bury them tonight in the cornfield
Put a church key in your pocket
We'll hop that freight train in the hall
And we'll slide all the way down the drain
To New Orleans in the fall!

For more on Tom Waits visit: