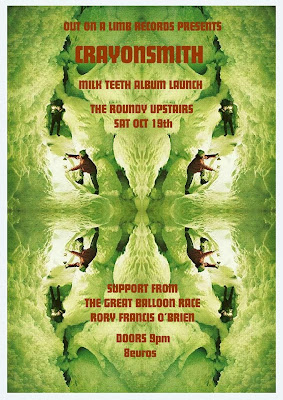 The recently refurbished Roundy hosts the Cork leg of Crayonsmith's album launch tour for Milk Teeth which hits all good record store shelves this Friday. With Rory Francis O'Brien and The Great Balloon Race (who coincidentally enough have both featured as part of past G-Man Presents... sessions) announced as support, this is a chance for folks to attend a showcase of some seriously gifted homegrown talent.


Earlier in the week, lo-fi London lad Stephen Keane aka Slushy Guts will be in Gulpd for an intimate show well worth shifting one's midweek-slumped bottom from the couch for with this year's DIY release A Host Of Freakish Others Revolving In The Future prompting kind words recently from The Quietus.

Dominating the weekend will be the various Murphy's Little Big Weekend events which culminates with a set from psych-pop peddlers MGMT who, along with big apple power-poppers Guards, make their Leeside bow on Sunday evening. Unfortunately unless your name was pulled out of the random hat, this being a non-ticket raffle affair, entry to The Savoy could prove to be a tad troublesome.

Note to film buffs that the very first Indie Cork film festival opens Wednesday with the five days of big screen brilliance accompanied by quite a lot of music including The Hard Ground (Thursday), Dublin Laptop Orchestra (Saturday) and Mike Gangloff's The Black Twig Pickers (Sunday) with The Crane Lane on Phoenix Street the venue for all music events. For further information visit indiecork.com.

If I have forgotten a show or listed a gig incorrectly feel free to let me know! Please make sure to confirm gig details with the official site in advance.
- For more gigs and dates see the overall gig guide here