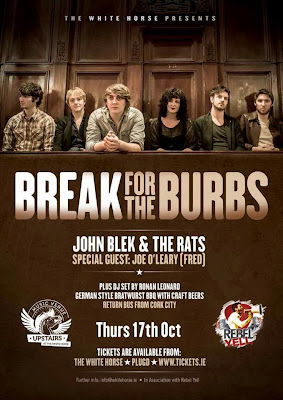 Bumper bag of Blek goodies up for grabs...

Fresh from last week's festivities on Douglas Street as part of the second annual Coughlan's Music Festival, Cork's John Blek & The Rats have announced the upcoming White Horse show on Thursday 17th October will be the americana-praisin' sextet's final hometown gig of 2013. To celebrate, both the band and the blog have teamed up to offer one lucky reader the chance to win not only a pair of tickets to the gig but also return tickets for the bus from Cork City to Ballincollig, a limited edition John Blek & The Rats tote bag, a JB t-shirt AND a copy of the band's brand new album Leave Your Love At The Door, released earlier in the year. Support on the night comes in the form of special guest Joe O'Leary of Fred.

To stand a chance of winning the above, all you have to do is like the official G-Man Facebook page and then follow it up by popping a quick mail to comps@thegmanworld.com containing :


The winner will be notified next Wednesday morning (9th October).


For more on John Blek & The Rats visit:

- John Blek & The Rats play White Horse, Ballincollig (Co. Cork) on Thursday 17th October 2013
- Tickets are priced at €10 (€15 including coach trip) and available from Plugd Records
- A coach will be leaving Cork city and returning later that night.