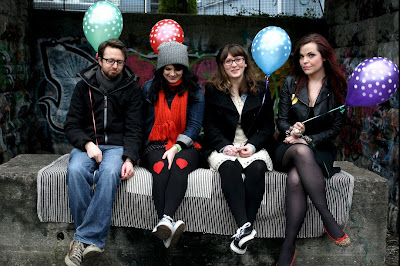 "...The entire idea behind Dott: ignoring responsibility, innocence, fun and romance."
Crayonsmith got the ball rolling last month with a blow-by-blow account of their latest release. This month it's the turn of Galwegian garage-pop gurus Dott who visit Cork this weekend as part of the latest show in The G-Man Presents... series. Lead-singer and songwriter Anna McCarthy walks us through the retro-rocker's twinkling début release step by indie-pop-sprinkled step. 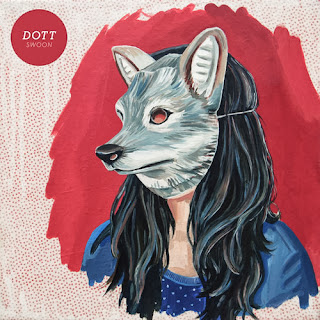 01. 'Small Pony'
Anna: This was one of those songs that took no time to write and was ready to play live almost immediately. Laura (bass) always has her favourite songs in the set and whenever we rehearse this you hear a little "yay!" come from her direction. I hope this is the first pop song to reference House of Leaves by Mark Z Danielewski.


02. 'Day That I Found You'
This is a song that floated around in my head for ages before I managed to pin it down. I remember writing the outro in the shower one day. It's about a night in May back in 2006 when I took a chance and went for a drink with someone I haven't been able to get rid of since! (Puuukkkkeeee) I love Miriam's guitar on this track.

03. 'Rain Day'
This was inspired by the very joyous moment when a good friend broke up with a nasty character. It's one of the few Dott songs that isn't about being in love and it also makes Laura shout "Yay!" when we rehearse it.


04. 'TEFL'
Tony (drums) is a TEFL teacher and this inspired me to write a love story about a TEFL teacher who gets separated from their other half because of the lack of local jobs and better opportunities abroad. A typical post-recession Ireland problem if you ask me.


05. 'Leave Tonight'
This was the first ever Dott song. I wrote this when I was on a round the world trip. I think it embodies the entire idea behind Dott: ignoring responsibility, innocence, fun and romance.


06. 'Talk To You'
We were all really happy with how this song turned out. It changed quite a lot from the original idea to the finished recording. This was all down to letting a note ring out with feedback at the end of a section of guitar. Fiachra (the engineer for Swoon) thought it sounded really cool so we went a bit mad with it and just made a wall of feedback for the whole song. It's quite subtle but I love how it sounds and now the song wouldn't be the same without it. I remember the day Laura came to practice with the bass line for this song and I just loved it. You can tell she really likes a song when she comes to practice with her homework done! Haha.


07. 'I Love You Too'
This song is a kind of response to Squarehead's song “I Love You”. It’s about a person telling someone they love them for the first time but that someone is too shocked to say it back right away… and the moment is ruined. I find New York City extremely inspiring. Last Summer I had been in Toronto for a week and hadn’t thought of any new songs and then the melody for 'I Love You Too' popped into my head immediately when I was on the subway from the airport in New York City.


08. 'Start All Over'
I love finding songs with a bare drum intro because I use them to loop the beat and write my own songs around it. I wrote this song along to the drum intro from 'So Bored' by Wavves, and I can't actually listen to that song through now because it just seems wrong. Laura and Miriam did some awesome backing vocals on this track. Fiachra convinced Miriam to record a Shangri-Las-inspired spoken word piece in the middle 8, but it made us laugh/cringe too much so it didn’t make the final cut. Fiachra was gutted!

09. 'Love You Forever'
There is a line in this song that is a little shout out to Nicola [Cosgrove - Rites], our original guitarist and perhaps my wife-to-be someday. Fact alert: Nicola's twin sister Elaine wrote the poem that 'Let's Do It' from Button is based on. I really like the vocal effect on this song, but I can't tell you how we did it because it's Fiachra's trade secret!


10. 'Last Summer'
This song is a completely factual account about growing up in Schull, Co. Cork and how teenagers who live there are devastated every year when the summer ends and everyone goes back to where they came from. I had to rewrite the lyrics to make them a little less cringey, but I don't think I was too successful!


11. 'Cherry Blossom'
This song is for someone very special who isn't around anymore sadly. Cherry blossoms remind me of this person and make me sad and happy at the same time. This song was on our EP and we decided to re-record it because we knew we could do a much better job on it. I'm really happy we did because I love the album version now.


12. 'Another Summer'
This is my favourite song on the album. It's another post-recession type thing where people keep moving away to get better jobs in other countries and other people get left behind. It's about someone who loves where they live but is questioning if it's still the same place when you take the special people out of it. This song also changed a lot when we recorded it. We went a bit mad with the guitars and the lovely reverb on the drums was achieved by placing a mic in the hallway outside the studio.