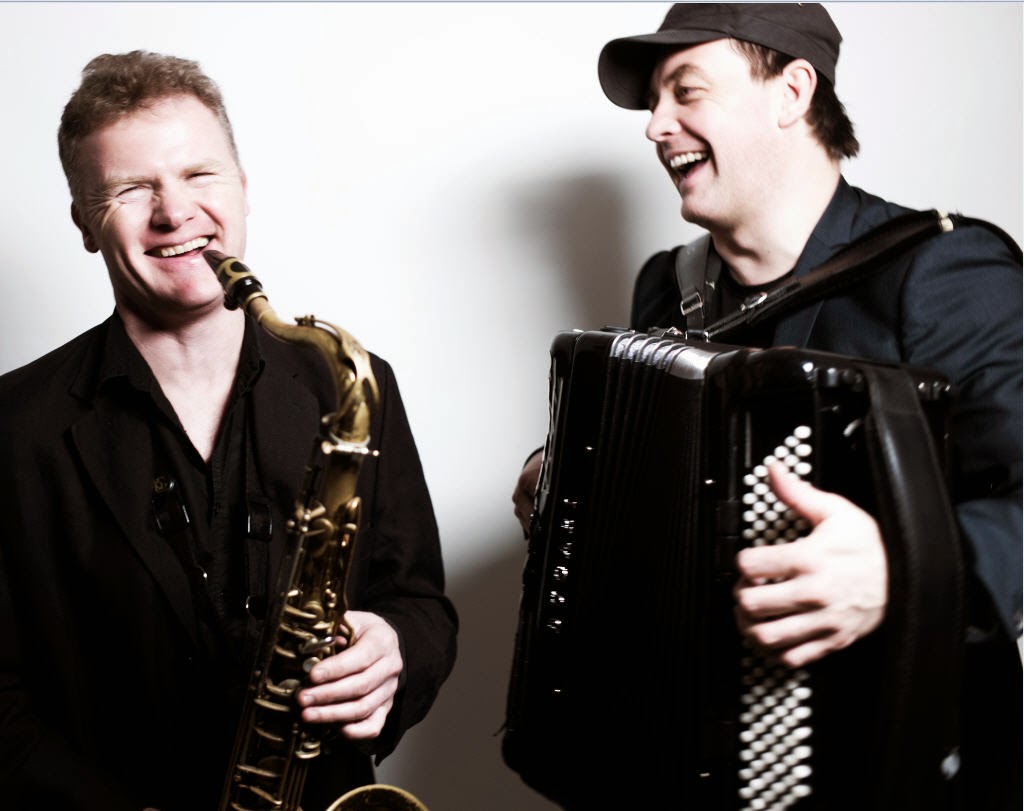 “We do actually like Whitney Houston and Teddy’s Bear Picnic, it’s not being done for effect. It’s genuine.”

The below interview appeared in Cork's Evening Echo on Thursday, 30th January 2014.

Such statements are not usually volunteered by respected jazz musicians but Iain Ballamy and his Scandinavian cohort-in-crime Stian Carstensen (incidentally, also the first Norwegian arrested for playing violin whilst driving) of having been are not a conventional jazz combination. Performing under the Bertolt Brecht-inspired moniker The Little Radio (an English translation of one of the Bavarian bard’s compositions), the unlikely pairing of renowned English saxophonist Ballamy and Nordic accordion-player Carstensen has been winning over crowds up and down the UK with their uncontrived mix of well known melodies and virtuoso abilities. The accordion and the saxophone not being traditional bosom buddies, it’s interesting to hear how The Little Radio first buzzed into life.

“Back in the last century, I was working with the keyboard player and composer Django Bates”, recalls Ballamy, repeating a tale to be recounted many times in the future I’d bet. “I worked with him for many years and he had invited Stian to come and beef up a band we had called Human Chain. We had a percussionist, a guitarist and Stian on accordion. Electronics being what they are, everything sort of blew a fuse and broke down during the soundcheck so we sat around for about a quarter of an hour and got bored so we went backstage and sat around there and got bored. We started chatting and he was like ‘do you know this tune’ so we played that and it sounded quite nice with just the two of us and it went on like that for about an hour until everything was back up and running. The room we were in backstage had a nice ambience without being too echoey or too dry and I think we immediately noticed there was something about having all those reeds and the accordion and the tenor saxophone, and if played at the right dynamic it kind of made one sound so it was hard to tell who was doing what. Not only did we discover that it was both a humour and a sound fit but also repertoire-wise we had no embarrassment about playing things that we liked rather than things that other people might not think are hip or cool or intellectual.”

This sense of playfulness with song-choice has garnered the duo acclaim throughout the UK and Scandinavia, with reviews and biographies constantly referring to both players’ infectious “sense of fun”, an integral aspect of their live shows.

“As I’ve grown and become a dad, I’ve realised more than I did when I was younger that musicians’ lives depend on people listening and liking the music we play and without dumbing down we have to reach out in some way or otherwise we’re basically screwed. The piano player Gareth Williams said recently ‘if you play a song that the audience knows, you can do anything you like in the middle bit’ and there’s truth in that. Whereas if you play totally original music people are lost from the beginning rather than taking them on the journey with you. Not all the music I play is as accessible as that but it’s become more important to me nowadays to be aware of that whereas thirty years ago I might not have cared.

"Thinking back, what jazz musicians used to do was take popular music or songs from films and shows of the time and use them as a way to show what they could play, where they could go with it and then come back again. Don’t forget John Coltrane played 'My Favourite Things' and 'Chim Chim Cheree' for example. You could say that seems absurd for the man that made Love Supreme to be playing Chim Chim Cheree but the point is to make a connection with the listener.”

With a songbook ranging from Chopin to Whitney Houston, the deliberation over setlists and album choices must pose a conundrum. Not so according to Iain, quite the opposite in fact. “It’s very natural. We don’t sit around scratching our heads. There’s no pitching or proposing. It’s more ‘this is nice’ and ‘yeah I know that’. They just seem to come up like bubbles in your mineral water.”

Upcoming tour dates:
For more on The Little Radio visit:

- The Little Radio play Triskel Christchurch on Tuesday, 4th February
- Tickets are priced from €12 and available from the Triskel box office and triskelartscentre.ie