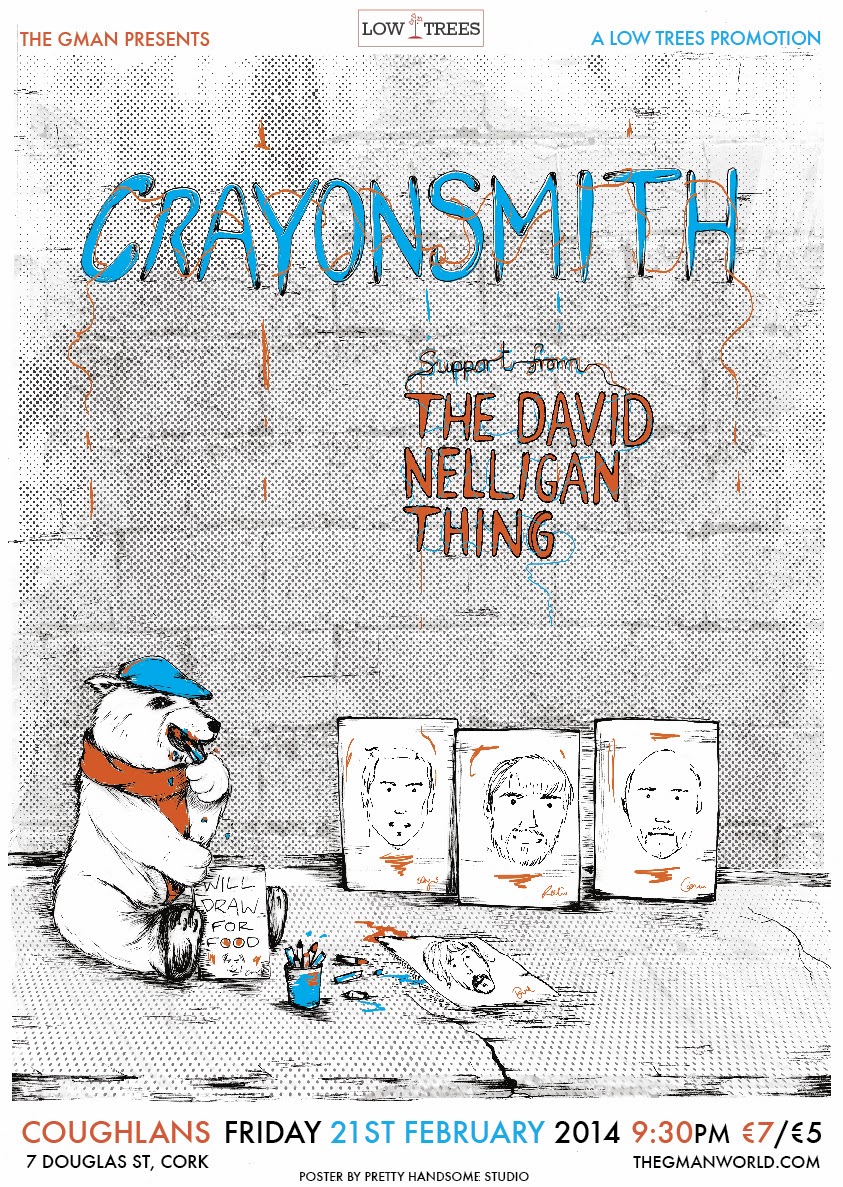 It's all about firsts this week as the very first The G-Man Presents... show of 2014 rumbles into life in a new venue, another first. Hosted by the newly crowned IMRO National Music Venue of 2013, Coughlan's of Douglas Street provides the intimate surroundings for what is sure to be another great evening. Topping the Friday night bill will be alt-pop trio Crayonsmith who will be joined by a solo David Nelligan Thing performance. Tickets are priced at €7 (€5 concession) and available on the door on the night.

Early in the week there are quite a few options for the wind-braving folkies beginning with U.K. duo David Harbottle & Freya Jonas who visit The Crane Lane Theatre on Tuesday night as part of a whirlwind Irish tour followed by Cork's own "international folk hero" Niall Connolly's stint in Coughlan's on the following evening. Then the same venue plays host to Connolly's fellow Corkman Ian Whitty on Thursday before the ever-ascending star of Lisa O'Neill rounds off the folk-nastics in Cyprus Avenue on Saturday evening.

Those looking for a harder edge may wish to check out the 7th edition of Rumble on Barrack Street in Bradley's Friday and even sludgier rock with Fuckhammer in the same venue on the following night.

Before I forget, 'Luka' fans can make their way to the Opera House for the lady-behind-Luka i.e. Suzanne Vega on Friday evening

For a day-by-day breakdown of gigs taking place in both Cork city and county over the next seven days see below.


Wednesday, 19th February
- Audio Fires in Bru
- Niall Connolly in Coughlan's
- College Jam Session in The Crane Lane Theatre (8.30pm)
- UCC Battle of the Bands Heat #3 in Cyprus Avenue
- The 1975 in The Savoy
- Eddie Reader in The Grain Store (Ballymaloe)


Thursday, 20th February
- Don For Chickens in Bradley's of Barrack Street
- Ian Whitty & The Exchange in Coughlan's
- Walking On Cars in The Pavilion SOLD OUT
- Playground of Dreamss: Paradox (acoustic), Screenreader and more in The Roundy


Saturday, 22nd February
- Okus and Fuckhammer in Bradley's of Barrack Street
- Posters In Your Room in Coughlan's
- Lisa O'Neill in Cyprus Avenue


If I have forgotten a show or listed a gig incorrectly feel free to let me know! Please make sure to confirm gig details with the official site in advance.
Coming up in February:
29th March - The G-Man Presents... House of Cosy Cushions in The Roundy