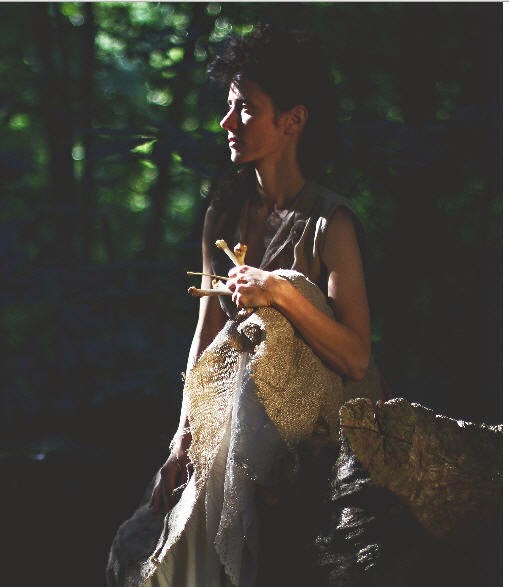 Be it in her subtle shamanic sway, or how her seemingly endless limbs stretch adoringly into the sky as if in praise of some unseen sungod, Diane Cluck could easily have been born a tree. As wise as a willow, timelessly beautiful with deep, absorbent roots now settled in Virginia on the east coast of the United States, the Pennsylvanian-born anti-folkie had been reluctant to film videos for her songs until the recent release of her latest single ‘Sara’ whose accompanying video sees the singer take a fatal walk in the woods which tends to happen when taken to strolls with Ereshkigal, a Mesopotamian goddess of the underworld. Having been hesitant in experimenting with the visual medium, it was a wonder just how important visual expression is for Cluck. “Very! And, not very. I make things intending that they can be meditative objects. It took me a long time to make my first video because I wanted for people to have their own experience of the songs I was making without more imposed on them by me. Sometimes a music video, or a hair-style, can impair one's experience of a song. I'm serious about this but recognize it's a wildly humorous idea.”

Speaking of ideas, from what other wells of inspiration does she draw from when writing songs. “Life, relationships, sexual fantasies, textures I find appealing (often old cloth, paper, things in nature), tea, cooking. I draw from my subconscious a lot, which is really about making space for it. I enjoy linking information to a particular melodic shape. It's something I love getting lost in.”
And it is such influences that shaped the sounds found on Boneset, Cluck’s first official release since 2006’s collection of songs Monorcana, which does differ to its predecessor in how it was translated to record. “Boneset is my first studio album. I didn't enter a studio to record Monarcana. My other albums were all recorded in home situations: digital workstation, tape recorder, 4-track. I put a lot of energy into creating songs and wanted to take the best care of them I could so I brought them into a studio this time. That is a big difference between me then and now; I am learning to take good care of myself and the things I make.”

With a mammoth European tour scheduled for late Spring consisting of over forty shows (including a first Cork date since visiting the Half Moon Theatre with Jeffrey Lewis way back in 2003) between now and the end of May, the line-up will once again include trusted road-companion and cellist, Isabel Castellvi. “I like to tell people we met on Match.com but maybe I'm getting tired of the joke. How we actually met is that Isabel emailed me to say she'd been playing along to Oh Vanille and said she thought it could be nice to play together sometime. I vetted her online and discovered she was an accomplished cellist. When we got together it worked very well. I've only played with people with whom there is some understanding; In other words, trust and friendship. I've never had a session band. Actually, I did once record with session players, and it was great, because we found the friendliness.”

A seasoned multi-tasker and master of many instruments such as guitar, harmonium, ankle-bells, and xylophone it was the trusted upright that remains fond in memory. “My first love was the piano. I liked my friend's toy piano and I liked the one in my kindergarten classroom and knew how to play it. My parents bought a piano for me when I was seven; it was an eventful day. Some of my father's friends helped move the piano into the house. One man's wife, Lisa was her name, had long red fingernails and she played it first. I was mesmerized.“

Self-taught with a keen interest in self-sufficiency, Cluck is not merely a dab hand at playing piano and guitar. Cooking, drawing and painting are but a few of her not-so-well-hidden talents. “I'm also good with hand-sewing.”, she adds. “I'm especially good at tying threads over and over, in the same place, to hold a good knot at the beginning of hand-sewing. I started quilting when I was a teenager and put in a lot of practice.”


For more on Diane Cluck visit: