Walk This Way: The Space Lady 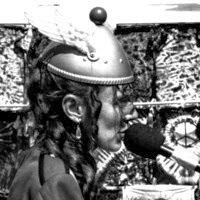 Walking on the moon with Susan Dietrich...

As posted in early Spring, Fractured Air and Plugd Records will welcome San Francisco's casio queen Susan Dietrich Schneider aka The Space Lady to Cork for the first time in her forty plus year career with a Saturday night show booked for Triskel Arts Centre's TDC auditorium. Before then, in an exclusive for this lovely little blog, Susan DS takes us track-by-track through The Space Lady's Greatest Hits (minus the bonus tracks) in the latest edition of Walk This Way.


#1 Humdinger
Written for me by my husband and musical mentor, Joel Dunsany, shortly after I graduated from accordion to the Casio MT-40 around 1982, and was attracting a lot of attention in the subways of Boston.

#2 Synthesize Me
Same as Humdinger, but a few weeks later.

#3 Major Tom
I began covering this Peter Schilling hit in 1984 at Joel’s suggestion, shortly before we left Boston and returned to San Francisco after 12 years of struggling to survive as artists there.

#4 Ghost Riders In The Sky
One of my favorite songs since my childhood in Colorado, written by Stan Jones and first recorded in 1948 by Vaughn Monroe. Joel had found an LP rendition of it by Dennis Lynde in a Boston thrift store, which we had been listening to non-stop for days, and I was determined to try it myself. I had just bought a large battery-powered bass amp (a “Moose”, as opposed to the “Mouse” I had been using), and it had a huge, powerfully deep sound down in the subway tunnels. I arranged my version of “Ghost Riders...” while fiddling around with the Casio drum rhythms and discovering I could make the sound of pounding hoof beats by speeding up the Pops setting. The rest of the song just fell into place after that.

#5 Domine, Libra Nos / Showdown
Joel and I were convinced nuclear war was imminent from back in our “cave days,” and songs that predicted that, or seemed to warn of that possibility, were a natural for TSL to cover we thought, and we interpreted Jeff Lynne’s “Showdown” as just that. Then to make the message even clearer, Joel suggested I recite the poem from “A Canticle for Leibowitz,” one of his favorite post-apocalyptic Sci-fi novels.

#6 Fly Like An Eagle
I arranged this song on New Year’s Eve of 1990, as a self-evaluation for our society at the turn of the decade, and I played it into the night for the revelers in The Castro District, where all the action usually was on holidays in San Francisco. It turned out to be fairly well polished just in time to make it onto the cassette I recorded a few weeks later.

#7 Born To Be Wild
I don’t remember many details about how or why I chose to do this song, except that it was a classic 60s hit and advocated what we hippies were doing, opposing the Establishment, “bucking the system,” being wild. And it gave me a good vehicle to demonstrate how I could use my drum roll to sound like a revving motorcycle (pun intended!).

#8 I Had Too Much To Dream (Last Night)
Joel and I had both loved this song even before we met, and I decided to cover it because I wanted to make a musical statement about how deeply my psychedelic experiences had influenced me, and speak to those who had had similar influences. Taken literally, it’s just a love song, but the title implies much more, at least to those of us who have dropped psychedelics and forever been transformed.

#9 From The Womb To The Tomb
Joel wrote this song for our newborn son, Huxley (named after Aldous Huxley, one of our favorite authors). Thus the line, “While I was in my momma she was rockin’ on the street.”

#10 Ballroom Blitz
Joel chose this song for me while listening to his growing collection of thrift store LPs, and thinking in terms of what would work for my repertoire. I liked it especially because the first verse seemed to speak to the passersby who ignored me, or made condescending remarks, like “Get a job,” or “Get a real job.”


“It’s been getting so hard, living with the things you do to me….
Things are gettin’ so strange, I’d like to tell you everything I see….”
For more on The Space Lady visit: