The Cave: interview with O Emperor 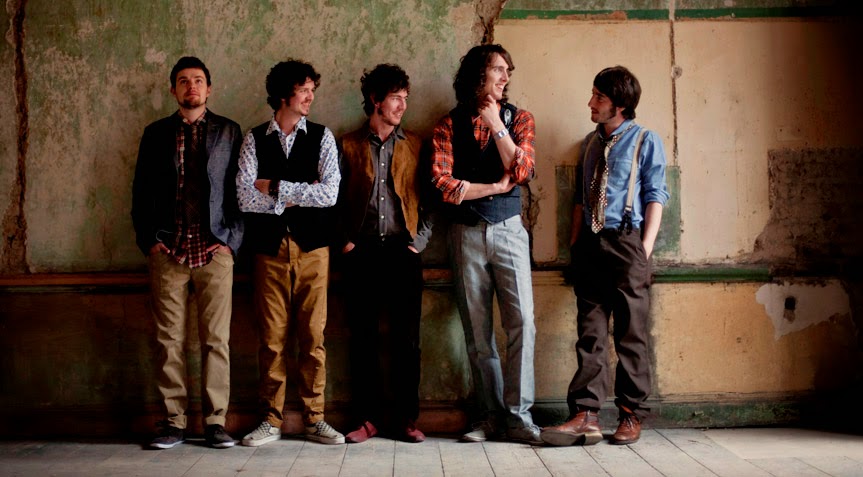 With the return of Cork Opera House's subterranean shenanigans this weekend, again pitting an eclectic blend of local and national artists together 88 steps beneath the ground for three days of homegrown music, Brendan Fennessey of Waterford-bred-but-Cork-adopted prog/folk/rock fivesome O Emperor took time out to talk funky new sounds, septic tank sessions and whatever else was on the talented stick-man's mind earlier in the week.

The G-Man: A headline Opera House show, another Choice Music Prize nomination and a whole host of high profile festival spots: it’s been quite a year for O Emperor. Besides the impressive CV additions, in what ways do you feel you have progressed as a band since the release of Vitreous?
O Emperor (Brendan): I think we've progressed in that we seem to be confident in doing pretty much whatever we want musically at the moment. We're very happy with Vitreous but it took quite a while to get the right material together for it and figure out what the overall aesthetic should be. In contrast, the new stuff we've been working on recently has come together really fast. We haven't gotten many opportunities to meet up and jam so we've also been sending each other ideas over e-mail and developing them individually. That's been pretty fun as the results can be fairly unpredictable!

Although invited to play, in the end O Emperor didn't make it out to famous Texan media event/festival South X Southwest this year unfortunately. The event’s integrity has been questioned in recent years simply as everyone is there to try and make contacts and raise the profile of their respective bands. Although this causes the cynical head of the industry to be raised like some sort of musical medusa, it can still be fun to simply meet new bands and talk to new people.

At what point do you feel genuine enthusiasm and interest devolves into schmoozing and what do you make of this part of the music business in general?
Ha that's a good question! I've always been wary of consciously setting out to "network" with people as opposed to just meeting new people with no ulterior music industry motives in mind. But I guess for a lot of people working in the industry, schmoozing is naturally just a part of what they do and that's okay. I don't think anyone's under any illusions as to the nature of the music industry at this point. If you can take that stuff with a pinch of salt its healthier in the long run.

Being at the height of it right now, how has festival season treated O Emperor so far?
It's been pretty cool so far. The ones we're looking forward to most are Longitude, Castlepalooza and Knockanstockan. It's our first time doing Knockanstockan and I've heard some great things about it. The people who run it are really sound too. We're hoping to try out some new tunes as well.

If O Emperor curated a festival, who would be your headliners and what would set this festival apart from all others?
Right now we're digging Ariel Pink's Haunted Graffiti a lot so they'd certainly be a consideration for headliners. I'd be hopeful that he wouldn't go apeshit and refuse to sing though (there's some fairly funny videos of that on youtube from Coachella). To set the festival apart......I dunno maybe make it a nudist festival? Has that been done?!

Although slightly overshadowed by a certain cowboy in the news this Summer, a final decision is to be made soon on a 6,000 capacity events centre. Some folks are excited, some are extremely worried about its possible affect on the city. What is your take on this Summer side-story?
I guess it would all depend on what kind of acts end up being put on in there. There's been some cool acts in the marquee over the years (Al Green and Brian Wilson were both particularly awesome) so to have that kind of stuff more regularly would be cool if it went that way. I think the positives probably outweigh the potential negatives.

So to The Cave: ever seen The Descent? If not you should watch it. That should keep you all nicely on edge throughout the show.
Ha, maybe we could suggest they have a screening of it down there next year!

Did you have any worries or trepidations about agreeing to play a gig below the ground?
Not really, aside from carrying gear up and down the 80 or so steps! I think it'll be worth it though, it looks pretty amazing from the videos I've seen. Plus, it gives us a chance to try put together some weird acoustic versions of our tunes.

It's commonplace for bands to adjust their sets depending on the size of the room. What do you do to prepare for playing in a cave?
The acoustics down there are really cool so I guess we'll try use that to our advantage. For lots of vocal harmonies it'll be really nice I think. It'll be hard to get an impression of that in our shitty rehearsal room though.

What other strange locations has O Emperor played in the past? (Or would like to play in the future)
We've played in a lighthouse before. Oh and many, many moons ago some of us played a gig atop a septic tank at some party in a garden. That was where we were told to set up and we didn't really think to question it. We hope to play on the moon eventually á la Parliament's Mothership Connection but probably way less cool 'cos we're white boys from Waterford.

One Ireland’s true gems Ger Wolfe is also set to warm ears with his wonderful words and melodies. Your music being so different, it’s not often you will see O Emperor and Ger Wolfe on the bill. How do you see the mix working on the night?
I think it'll be a nice mix. It's cool that the organisers aren't afraid to mix things up a bit in this way. I think what he does in a live setting will be particularly suited to the venue. I saw him play a few years back and really enjoyed it.

I live right by your practice space so every now and then I get to hear some interesting sounds emanating from across the street. What new sounds are O Emperor cooking up at the moment?
There's a pretty crazy bunch of stuff going on, alot of it is surprisingly really groove-based stuff that we've been working on making as unstoppably funky as possible. I know it seems like a pretty unexpected direction but most of that stuff just came really naturally from us jamming in the room and recording everything. Richie's got some seriously sexy basslines that I'm quite excited about. We're digging the approach of getting an awesome groove going, repeating it and then putting different melodies or weird shit over it at different times. We're really excited about where its going and with how easily its been coming together.

You share that room with The Altered Hours. Although ye seem good pals, does this sharing of a creative space with another top band help push you, introducing an amicable but competitive edge.
It's a real treat hearing them jamming and coming up with new stuff all the time. There's definitely been times when I've been eavesdropping on some of these jams outside the door (sorry guys I hope that's not too creepy). I remember stopping by at one point when they were working on 'Dig Early' and just being blown away by it. They're a great band and great people to share a creative space with.

For more on O Emperor visit: