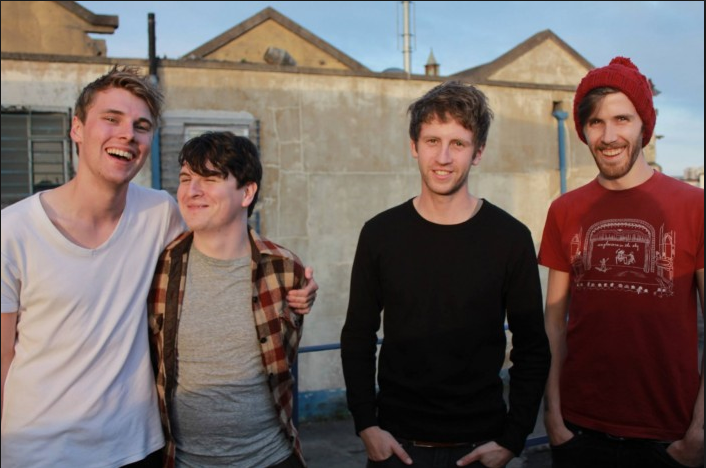 The below article was originally published in the 4th September edition of Cork's Evening Echo.

Trembling, nervous sweat drips from my brow as the deathblade draws closer. Wrists bound but fresh out of laser-watches, it appears this super-spy’s license to kill is set to expire (more like be torn in half) sharpish as the blood-thirsty buzzsaw of doom beckons. Unlike the traditional climax to 007 movies though, this one ends with my guts, bow-tie and intestines shredded and strewn across the floor in true slasher-flick style. No chance of getting my deposit back on this tuxedo so? And this is but one of the vividly violent visions that coursed through my corrupted mind while first listening to Girl Band’s 'You’re A Dog', the opening track on their France ‘98 EP upon release in 2012. And I’ve been sadistically addicted to everything they’ve unleashed since.


From the 25 second scream-room squeal 'Cha Cha Cha' to the just released bone-bop rocker 'De Bom Bom', you can almost taste the sweat on the Dublin foursome’s recordings.
“One thing we always wanted to do was to be able to recreate live what we do in the studio,” confirms Girl Band guitarist Alan Duggan. “We record live, we don’t play to a click track and we all play in the room together and then put the vocals on top and maybe just add some percussion if we feel it needs a bit more. That is really important to capturing the live energy The biggest part is always the drum sound. If the drums have a live room feel it just tends to sound more energetic.”

Speaking of perspiration, it is from the back of a cramped van that Alan has courteously agreed to chat. “Somewhere in England on the way to Birmingham”, is the imprecise location of the quartet as we speak, who are slowly beginning to generate a bit of a buzz across the Irish Sea. Besides being armed with damn good songs, glowing write-ups from national publications such as The Guardian and NME must help.

“The best part about getting those kind of reviews is that it means a lot of the shows are better attended which means we are able to get more gigs and festival slots so it’s cool that we’ve been able to tour a lot more on the back of those reviews. This will be our third tour of the UK and, for example, the first time we played Brighton to about 40 people. The second time we came back it was 100 for a free-in show and the last time it was a ticketed gig and it completely sold out. It’s good to see that it’s actually working with a lot of the same people coming back to the shows.”

And Girl Band’s rise doesn’t stop with sold out shows, national press and radio play from Lauren Laverne on BBC Radio 6Music, there are some pretty juicy support slots on the way too.
“We’re playing with Metz and Slint. We’re looking forward to both as they are two very different bands so they will be completely different shows I would imagine. With Metz the shows are in smaller venues, about 200-300 capacity so they are going to be really fun and tight and sweaty. The other shows with Slint are in bigger venues, closer to the 500/600 mark, so it will be great fun to play on a big PA.”

Having previously lit up the now sadly defunct Pavilion on a number of occasions, Alan and co. are set to jet down south again soon, this time to participate in the upcoming Clonakilty International Guitar Festival. Taking place across various west Cork venues from 18th-21st September, the 10th edition will feature the nimble-fingered likes of American maestro Richard Gilewitz and Leeds axe-man Jon Gomm mixed with exciting homegrown talent such as Band of Clouds and Elastic Sleep. Expect lots of riffing, tapping, sliding...and pedals. Lots of pedals. I’ll never forget my own excitement as a young teenager upon successfully convincing a pal to reluctantly loan me his Zoom multi-fx pedal. Cue locking myself away for a weekend to noodle with all types of dizzying distortion and delay sounds. I don’t think my (former) friend ever got that Zoom back… Alan, whose own axe of choice happens to be a Fender Strat, knows exactly what I mean.

“Oh yeah totally! Everytime I get a new pedal the thrill is still there, that childish ‘yeah deadly!’ element. Although with a new pedal I soon find that I am a bit scared of it as there are so many buttons and dials and options so it’s really exciting at first but then I have to try and find out what to do with it. It is only then that you can start to slowly integrate the sounds into a new song. Still though, new pedals: deadly!”