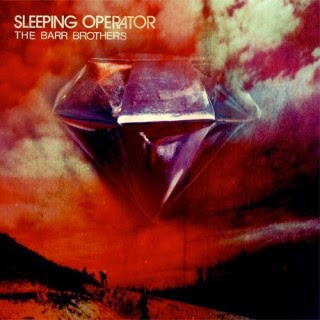 It’s clear from the get-go that The Barr Brothers are upping the ante on their second record, The Sleeping Operator. From the enticingly slow build of ‘Static Orphans’ - complete with Sarah Pagé’s dreamy mystical harp (and flute) - flowing into the big and bold boom of ‘Love Ain’t Enough’, this is a band ready to step away from the camp-fire and embrace larger rooms. The similarities between the choruses of The Beatles’ ‘Don’t Let Me Down’ and ‘Come In The Water’ (complete with stop...and then hit them with everything you’ve got) are so striking, the mind doesn’t have to wander far to imagine a furred-up Brad Barr causing a stir atop a roof circa 1969. Bluesy monster ‘Half Crazy’ sees the foursome ride the elevator straight down to the basement, smoky eyes tearing up the moment the doors slide open to reveal a seedier type of joint for the Quebecans to revel in before the epiphany-rousing ‘England’, led by Andrew Barr’s defiant beat, bursts through the fire-exit, tromping head hel high out into the morning light.


Though the Canadian quartet’s latest audio adventure is not all confined to an urban setting. The open road embrace of ‘Even The Darkness Has Arms’ and riverside roll of ‘Little Lover’ shows Brad, Sarah, Andrew and Andre haven’t quite turned city slickers just yet. More prone to the epic than buddies The Low Anthem and a little more polished than peers The Felice Brothers, The Barr Brothers are (a little less) quietly carving out their own route on the well travelled alt-country road.

For more on The Barr Brothers visit: