Review: No Cities To Love - Sleater-Kinney 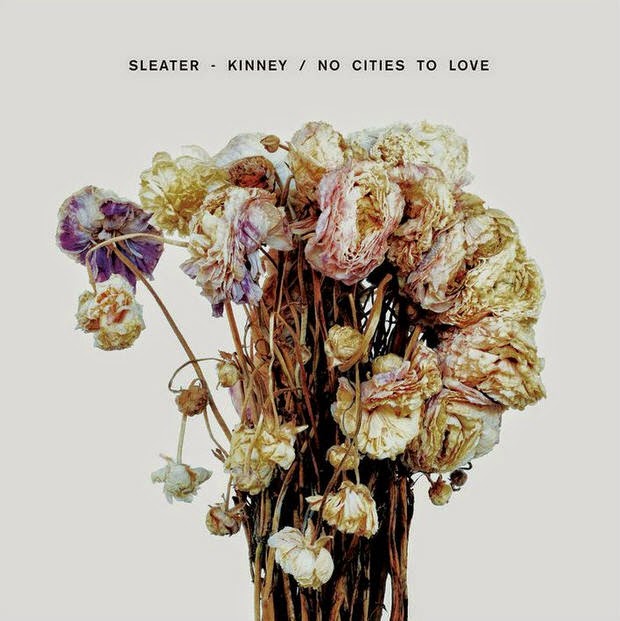 Maybe it’s the type of albums resting pretty - maybe a little too pretty - on the shelf at home these days but it’s been some time since a release has bothered me enough to bulldoze bodies out of the way in the hopes of reaching the fabled barrier spot at live gigs. Actually, if the record rack in question was a hotel, recent guests would be more of the nice day-at-the-spa and lounge-around-supping-martinis in free bathrobes type variety. Sleater-Kinney’s No Cities To Love is truer to the “how much shit can we forcefully eject out the window” philosophy of hotel-stay, a type of patron who will forever retain a VIP status in The G-Man Grande. From the mattress-mauling spring of ‘Price Tag’ and the corridor-carousing rock of ‘A New Wave’ to the floorboard-bending beat of ‘Bury Our Friends’, Sleater-Kinney’s return to the studio is a level-the-building at all costs affair, never letting up from start-to-finish. A frenetic energy exists on No Cities To Love that would be impressive for a début, never mind number eight. Chuck in screeching guitars, punk snarls and kick-in-the-dick drums and 2015 has its first fine album.

Expect Vicar Street to explode to the album’s punch-pop pillar ‘Surface Envy’ when Sleater-Kinney come to down on 26th March. See you in the front row.


For more on Sleater-Kinney visit:

- No Cities To Love is out on 16th January 2015
- Tickets are available now to see Sleater-Kinney play Vicar Street, Dublin on 26th March