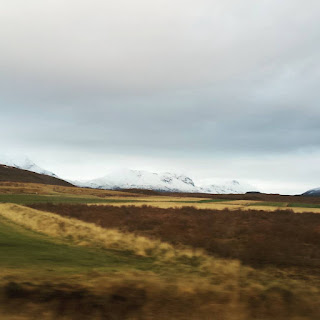 Some nice bits from Airwaves '15...
Holy Hekla Reykjavik sure is a special spot. From the calm, thoughtful pace of the capital city to the fantasy-like countryside speckled with geysirs and volcanos, it's one of the first cities in the world that I've visited that I immediately thought: "Yep, I could live here." Not that the coolest people on the planet would have me of course. Broken into two parts, here are my most memorable moments from the festival itself.

1. Grúska Babúska
Having wandered out into the depths of dark in search of the northern lights, I managed to miss all of Monday's music so it was up to the space-wonk stylings of Grúska Babúska to initiate me into my maiden Airwaves so it was only fitting that my first foray into the festival was with a local band. As with most shows taking place in Dillon that week, visibility was non-existent but the Icelandic foursome's selection of synths and acoustic sounds cooled my (exorbitantly expensive) beer and warmed my heart.


2. William Tyler
Maybe it would have been wiser to begin this list with two artists that I actually physically saw with my own two eyes but visuals were not required to lose yourself in Lambchop guitarist William Tyler's gorgeous guitar playing. Having flown 6,000 miles for a single 40-minute show, Tyler did not disappoint, preaching prayer and soothing souls with his finger-picking in a full Frikirkjan, a church located on the lake. I made it in late so got to enjoy from the rafters.

3. John Grant
Having been paired with the Icelandic Symphony Orchestra for this special Harpa show, John Grant was understandably out to impress, hence the U.S. songwriter speaking as much Icelandic throughout the concert as English. The locals have taken to their newly acquired immigrant as did the rest of the auditorium, rewarded for their commitment in queuing for tickets earlier that day. With an army of strings and brass to embellish and illustrate, it's no surprise that all of the Queen of Denmark songs that made an appearance stood head and shoulders above more recent compositions.

4. Reykjavíkurdætur
Reykjavíkurdætur (or Daughters of Reykjavik in English) were an unknown commodity to myself up until about a week before the festival but, seeing as every Icelandic blog/website/newspaper listed the 19-strong rappers as "must see" and "do not miss" I took myself along to NASA, a recently reopened nightclub to see what all the fuss was about. With so many women on stage passing the mic like a baton and most songs in Icelandic, it was as much a spectacle as a concert but the energy was relentless, the intensity intoxicating. Flipping between comical compositions and more rip-up-the-quo rhymes (at least judging by the crowd's reaction), there is a core group of four or five rappers that stand-out as Reykjavíkurdætur's serious voice and driving force. I'd just love to know what they were saying. Although the "Ass" song left no such ambiguity.

5. Father John Misty
From his percussion position in Fleet Foxes to his introspective solo works as J. Tillman, I've been following Josh Tillman's career on-and-off for quite some time now. The character that is Father John Misty is anything but introspective. Facing sound problems earlier in the set, the Rockville folkie turned pop preacher's persona is as entertaining as his songs. From flying high-kicks to a selfie-serenade for a "lucky" girl in the front row, the divisive FJM was a highlight in Harpa, the festival's flagship venue for the weekend.

For more on Iceland Airwaves visit: