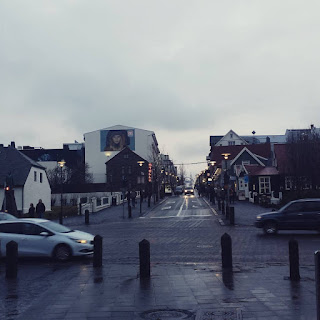 Still mentally gobbling down chocolatey Ris Buff treats and scrubbing in sulphur-scented showers, it's all a little surreal to be home. Continuing on the report card, here are some more shows that stuck out like a sugar-coated thumb.

6. Dream Wife
As mentioned in Part I under Grúska Babúska gigs upstairs in a crowded Dillon mostly meant you needed to settle for the audio experience. Not a bad thing. Occasionally, there'd be a chance to exploit those weak of bladder or empty of glass. So at Dream Wife, scuttling sideways like a tall, hairy crab I began to inch my little closer into viewing range. Soon a face could be put to Icelandic scream queen Rakel and English partners in punk-pop crime, Alice and Bella, accompanied for the very first time by a drummer. And of course that drummer would have to be from Cork. Great energy, tunes and showmanship all round. Go see them somewhere small, maybe in a venue that involves less scuttling.


7. Weaves
Queuing nearly an hour in the rain and northern cold to hit the front row early for Chastity Belt didn't exactly put me in the greatest frame of mind for a rock gig. However it did get us in early enough to catch the majority of Toronto quartet Weaves. The fact that a cold, wet, angry, beerless me even acknowledged their presence during their bubbling, blistering set in dockland dive bar Gaukurinn.is should be a marker of how good these folk are, never mind how much I loved them. Possibly the best set at IA15 for me.

8. Battles
Battles are back and still take no prisoners. Calculated fury sequenced to shake your bones brittle.

9. Jófríður
One third of Icelandic electronica trio Samaris, and and a prominent corner of the Gangly r&b-tronica triangle who would make their live debut at the festival later that week, it was simply as Jófríður that Ms. Ákadóttir made the most impact. Squeezing into the Bedroom Community commandeered Kaffibarinn rewarded earnest ears with (at first) seemingly simplistic, delicately defined songs fit for floating away to.

10. Rozi Plain
And lastly to the un-pindownable Rozi Plain who, like many bands and artists passing close to the Arctic in November, played a number of sets over the weekend. I managed to catch two. First at Sky Bar, the first chance I've had to witness RP in flight with full band. Songs from 2015's Friend dominated proceedings and I swear, every time I hear songs like Jogalong and Actually they get better and better and judging by the reaction by all who made the slightly claustrophobic lift-journey up to the top floor of Sky Bar, everyone else was in agreement. A similar set in the the even tighter Kaffibarinn on Sunday night was every bit as good topped off with Rozi herself pointing out the Northern Lights, then glowing green in the sky, as I said my hellos and goodbyes on the way out. How about that for a magical ending?

Quick shout out to Chastity Belt, Mafama and President Bongo who all warmed my ears and heart but just didn't make the list above proving lists truly are silly things when used outside of the supermarket.


Part I of The G-Man's Iceland Airwaves Top 10.

For more on Iceland Airwaves visit: