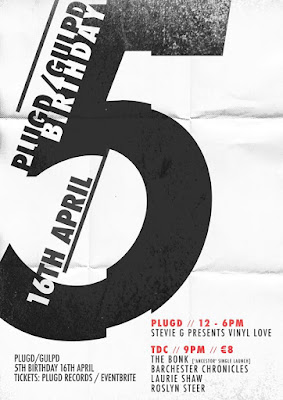 Record Store Day is always extra special in Cork as the day simultaneously marks the anniversary of the city's best loved record shop. Plugd Records celebrates 5 years in their current location on Saturday and, marshaled by expert disc spinner Stevie G, will have a whole host of folks playing their favourite records - loud - throughout the day followed by lots of live music in the downstairs TDC area later that night.

The Bonk - who recently premiered new track 'Ancestor' on this very blog here - will be joined by Roslyn Steer, Laurie Shaw and The Barchester Chronicles from 9pm in the Triskel Arts Centre's TDC auditorium with Stevie G keeping it all going in Plugd's sister business, Gulpd Cafe, until the early hours. See all the details over on the official event page.

Personally, I've stopped scanning down through the limited edition releases as the day is about celebrating my local record shop...and getting my hands on the new PJ Harvey record. And the new Richmond Fontaine release. Damn it, broke again. Stupid record shops...


For those on the outskirts of the city, get yourself over to Musiczone in Douglas, who will also briefly house lots of limited edition RSD releases with word of live music also promised.