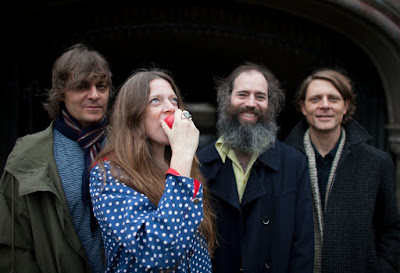 "Funeral folk, fuzz burn, pastoral pop, field Rock, or albion dirge", take Heron Oblivion whatever way you will but there's no denying there's some serious synergy going on here. Featuring Ethan Miller and Noel Von Harmonson (formerly of balls-out San Franciscan rockers Comets on Fire), Charlie Saufley (of swirly psych-pop band Assemble Head In Sunburst Sound) and completed by vocalist Meg Baird (of Philly folkies Espers), the foursome joined forces with Sub Pop in 2015 and have just stuck out their debut, eponymous record on the Seattle label. Slow rhythm swells, twin guitar jaunts and vocals that transport you from your bedroom at night, depositing you defenceless in the middle of a dark wood. No European dates yet for the San Francisco-based quartet but - hopefully - the name should start popping up on festival line-ups nearer the end of the summer.

For more on Heron Oblivion visit: