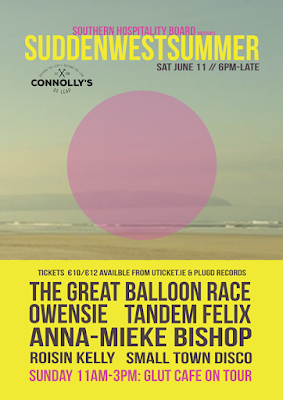 With the sunny glowball shining persistently and profusely in the sky, it's becoming embarrassing the amount of times I sporadically spurt "ROAD TRIP" throughout the day, especially to the bemusement of fellow queuers when standing in line for milk at the local spar. Still, we must make hay and SuddenWestSummer, the brainchild of local indie promoters Southern Hospitality Board, argues strongly for the case of heading west to Leap on Saturday for an evening's worth of outstanding - and diverse - Irish music. With Cork prog-jazz-rockers The Great Ballon Race topping the bill, Connolly's also hosts Out on a Limb folkie Owensie, indie foursome Tandem Felix, Dublin-based sound-swirler Anna-Mieke Bishop, and the now living on Leeside poet, Róisín Kelly. For those sticking around, Glut Egg Cafe will be serving up Sunday morning brunch. Why aren't you going again?


Those sticking to the city will be keeping on a eye on the tent-on-tarmac with Dropkick Murphys pouring pints of Celtic punk for Marquee goers on Tuesday evening with lots of pop promised for the rest of the week. For the full list see official ticket-seller site. Lisa Hannigan kickstarts a quartet of Cork dates in De Barra's on Wednesday night which will see the Irish songstress visit Connolly's on Thursday and The White Horse Saturday with the stand out Live at St. Luke's concert sandwiched in on Friday. Some of these shows are already sold out so pick up your tickets quickly if you intend on popping along. Also appearing at the church on top of the hill, composer and fiddle player Colm Mac Con Iomaire will be treating ears to works from his two solo albums with very special guest Ger Wolfe along for the ride. For me, this is the sleeper/under the radar highlight of the week. And rounding off the weekend in the church will be at triple album launch. All released under the Kant Cope Records umbrella, explorative and experimental performances from the Cork-based Roslyn Steer, Fixity and Sky, Horse and Death will take place in an intimate all-on-the-altar setting.

Those about earlier in the week, there's a book signing in Gulpd as founding member of The Las' Mike Badger and co-writer Tim Peacock launch The Rhythm & The Tide with the Tuesday night event featuring readings from the newly released book and a performance from Mike himself.

Mississippi songwriter (and adopted Irishman) John Murry visits Cyprus Avenue on Thursday. For an interview with the writer of critically acclaimed album The Graceless Age on the blog from the last time he played, see here.

For a day-by-day breakdown of gigs taking place in both Cork city and county over the next three weeks see below.