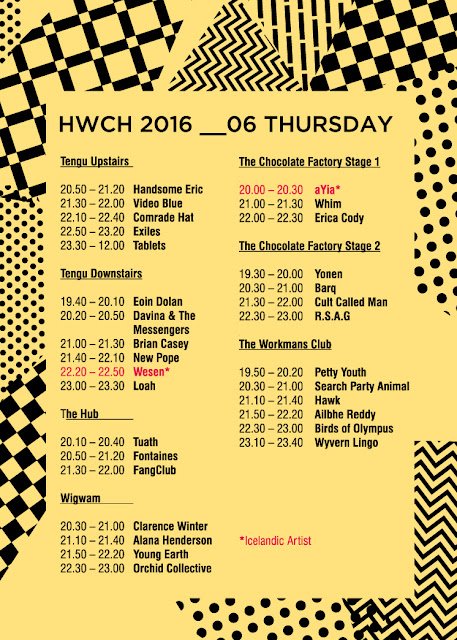 Ireland's flagship new music and industry showcase commandeers the capital once again with three days of sessions, talks and conventions kicking off on Thursday 6th October. More established names such as Wyvern Lingo, R.S.A.G. and Loah are charged with curtain-closing duties but, for those looking for a steer in a particular direction, here are a couple of recommendations for those out and about on Thursday. Convention critters - check out the full list of workshops/panel discussions here.

Who? New Pope
Where? Tengu (downstairs)
When? 9.40pm-10.20pm
Why? Gorgeous Galwegian dream-folk from David Boland (The Depravations).

Who? Alana Henderson
Where? Wigwam
When? 9.10pm-9.40pm
Why? Belfast cellist and songwriter who happened to tour the world with a crooner called Hozier.


Who? Handsome Eric
Where? Tengu (upstairs)
When? 8.50pm-9.30pm
Why? Lovely Leopardstown lofi that cites Alex G as an influence which should be enough to make anyone curious.

- Weekend Tickets €45, Nightly Tickets €20, Individual Venue Tickets €10, except for Tengu and the Chocolate Factory which have two stages - €12.50.