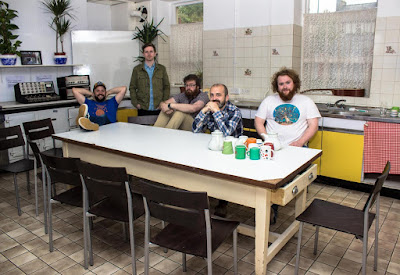 "The world we live in is a confusing, belligerent, beautiful fucker of a place."
Steve Ryan (windings)

September saw long-running Limerick quintet windings announce a new album and nearly half a dozen coinciding launch dates, including two for Cork. Songwriter/guitarist/singer/leader Steve Ryan recently opened up to the blog regarding a shift in perspectives, band dynamics and a whole lot more. Read in full below.


The G-Man: Where are you in the world right now, what are you up to and how are you feeling?
Steve from windings: I'm at my kitchen table in my house in Limerick. I just put my 18 month old son to bed, and I'm feeling a slight fatigue, but nothin' too heavy.

Folks like me will describe both the music and the band that is windings in all sorts of ways. After all these years, what exactly does “windings” mean to you?
It's my outlet. I thank my lucky stars for windings on a pretty regular basis. It's where I get to hang with my friends, make plans, create music, voice ideas, discuss stuff, and have a lot of fun doing it. It's really stressful at times, but that's gonna be the way when something is such a major part of your life.

Former guitarist Liam is now windings’ current bass player. How did such a decision come about and how has it altered the internal dynamics?
Haha! We like mixing things up in this band. Liam was presented with an opportunity to study in Barcelona almost immediately before we released I Am Not The Crow. It was a pretty prestigious MA course, and he would've been foolish to pass it up. It was an awkward time for it to happen, band wise, but that's life. We were lucky that Garry (Carroll) was available to join us on bass for a couple of years, with Mike moving to guitar. When Garry left, Liam was already back from Spain, and we asked him if he wanted back in. He did, which was great, but we told him he had to play bass now, as he'd hurt us and that shit sticks.

What did you want to say with the new record that hadn’t been said on previous records?
Most everything. Stuff I'd been embarrassed to say out loud previously, for whatever reasons. I wanted to get away from this kind of nostalgic direction I was taking in my lyrics. "Remember when we were young, and shit used to be sooooo muuuuch eeeasier" and all that shit. Nah, I'm done with that. I was more interested with talking about the now, my now, and not hiding stuff in metaphors and stuff this time around. I'm very happy with these lyrics. I still feel a bit embarrassed singing some of them aloud, but fuck my comfort man, that defeats the purpose of the thing.

What weight or expectation (if any) comes - from either internal or external - with following up a Choice Music Prize nomination?
Not much. This is our 4.5th album (windings released a split record with Dublin band Land Lovers in 2014), we like to think that we've never repeated ourselves. That's not what any of us want from this band. The Choice nomination was great, don't get me wrong, but there's no way at all we'd let something like that affect what it is we do. That'd be end times really, making music to try and win a competition.

It’s four years since I Am Not The Crow so a good gap between records. How important is the gestation period for windings songs and in what way?
It's not that important to us. We released a split 12" album with Land Lovers in 2014, so that was a nice way to clear the deck of stuff we felt was a slight departure from IANTC, but still of that period. It left us ready to get working on the new new stuff then. I had a bunch of stuff written already with the new album in mind. Two of the songs are very old for example, and I'd never been able to figure out where to go with them really. But when I played them for the lads, they pretty much took 'em over and turned them into actual songs. Real songs. I love this band. We all have families, careers, studies and shit going on outside the band, and to be honest, that's more important. Also, this band pays for itself, so when we're able to find time to head to a studio for a few days, we book it, do a bunch of gigs, and then that pays for the recording. Money and affordability is something of a speed-bump at times, but we're not in any rush. We'll keep doing this until we can't.

Be Honest and Fear Not is a pretty powerful title for current times. Do you feel a basic honesty has left the world?
The world we live in is a confusing, belligerent, beautiful fucker of a place. I rarely espouse the benefits of inspirational quotes or self-help theology. I pretty much hate that stuff. This title of ours comes from the doorstep of a hardware shop in Ennistymon, County Clare. It's in the doorway, people walk on it to get into the shop. I saw it years and years ago, and it really stuck with me. Honesty can be a scary thing; it can be intimidating, it can be hurtful, it can be enlightening, empowering, it can be subjective. It's dangerously open to interpretation and can sometimes be quite subjective. 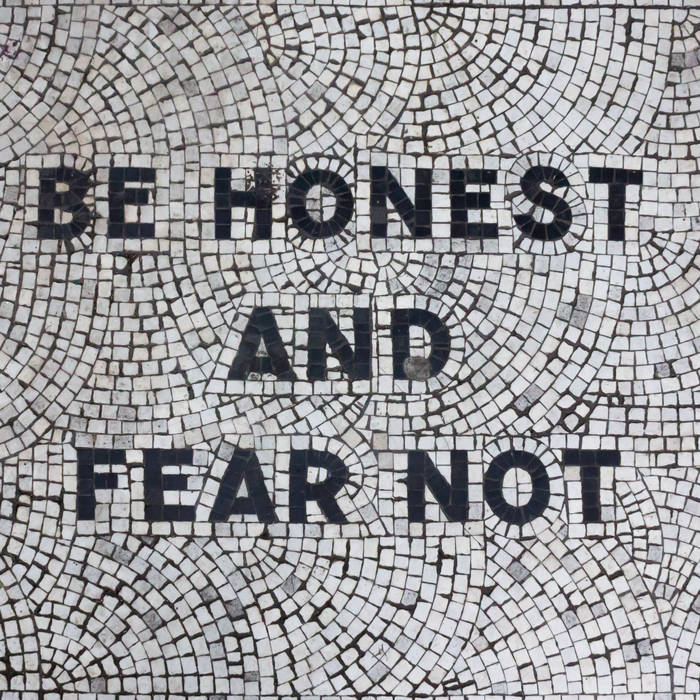 It also feels like honesty and decency is just not enough these days. How do you try and make a positive mark on a world where it’s pretty terrifying these days to even glimpse at a newspaper?
I sometimes feel that these days honesty just amounts to people online acting like little kids looking under a rock, finding something rotten, screaming "eeeewww, look at that, groooosss", and then running off to find another one while all their friends gather round the first rock going "eeeeeewwww" together. I'm lucky enough to have friends, family, and workmates who are a support system for each other. I'm lucky to have that, and I know it, because not everybody has it. All these people are making a positive mark on the world through their daily existence and interaction with others. I firmly believe that. And I firmly believe that that can be far more effective than any grandiose act of benevolence or "awareness building".

Care to share a little about the origins of new track ‘You’re Dead’?
The human mind can sometimes be a tricky place, with mountains, sheer cliffs, frightful, no-man fathomed and all that. Sometimes I find it difficult to shake off heavy negative thoughts, this happens periodically. I know when it's coming, so I can deal with it. It's nothing too serious, just shame, regret, bad memories etc, hence, "another dream, another graveyard, and all the tombs are open again". I find getting this stuff into songs a really cathartic thing to be able to do. It seriously helps me. It's not for everybody obviously. I'm not saying "everybody write a song, and your mental health will be grand". That is absolutely not what I'm saying. But for me, it's something that works, and helps keep me mentally healthy, and mostly happy.

I’m always intrigued by the repetition of lyrics, especially for a verse. Is it a confidence in what needed to be said, placing an emphasis on the words themselves?
I do this a lot, you're right. I've never been concerned with a standard verse/chorus type song arrangement really. The music comes first, the lyrics follow. Always. The tone of the music will sometimes deter the tone of the lyrics. When I've no more to say, then the lyrics are done. I'm not going to force a chorus or another verse out just for the sake of it. So I repeat stuff, 'cause I'm already happy with it I guess. I've already said whatever it is I've needed to say.

Sickness, partings, death itself, as we grow older life can start landing pretty powerful punches. How have such happenings rearranged your perspective on not only songwriting and music but life itself?
I hear you. Our band have had some little kids arrive into the picture over the past two years, so priorities have obviously shifted somewhat. There's also been loss and illness. This all permeates through what we do, and why we do it. windings is a pretty big deal to us, and not in the "we're gonna be the BIGGEST BAND IN THE WORLD COS WE'RE AMAZZZING ARRRRGH" kind of way. It's something we pour all our spare time into, all our spare energy, and it can be a demanding bastard. But ultimately, we love it, and that is why we do it. We pour ourselves into it, and we're very happy to do so. We're incredibly proud of this particular album for example, it's kind of personal to us.

What contemporary band or musicians do you truly feel are important?
Ah it's all important. The shit stuff is important because it makes it easier to differentiate from the good stuff. The good stuff is important, but also completely subjective. All Limerick bands I know are important because we're all coming from the same place and ethos, doing what we do for mostly the same reasons, and it makes for an amazing sense of community and inclusion. And that's not limited to like, rock music, or metal, or hip hop, I'm talking across the board.

What would make your life easier?
I have it pretty easy, no complaints here.

For more on Windings visit:

- Be Honest and Fear Not by windings is out now