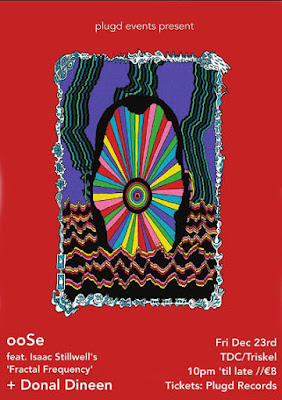 
Well run me over and call me Rudolph it's Christmas week already. The festive feeling was low in this one until a special screening of Die Hard in Triskel got the baubels burning bright and true. Gig wise there are still plenty of bookings to keep the rock and roll going into the new year with some highlights including: a very festive Cork Improvised Music Club gathering in Gulpd with all the clues in the Krautrock Christmas title (22nd Dec); Rubberbandits rock/mock two nights live at St. Luke's (21st & 22nd Dec); Cork's favourite independent record shop throw a Christmas party with Dónal Dineen, ooSe, and more helping Plugd sign-off pre-Christmas cheer in style (23rd Dec); Ger Wolfe & The New Skylarks play an intimate l'Atitude show (28th Dec); The Orange Kyte headline a holiday Kino show on the same night Hothouse Flowers say service at St. Luke's (both 29th Dec); Horse and Bisect unveil a split 12" in Triskel TDC (30th Dec); Mick Flannery counts down to 2017 in Cork Opera House on New Year's Eve. As expected, January is mostly reserved for hibernation so I'm using that as a chance to take a break until the middle of the month.

Nothing says happy holidays better than a solid evening of screamcore. Taking the opportunity to reform briefly, Cork four-piece Terriers guarantee a night of rambunctious rock and are bringing pals Ganglions (the Sheffield/Leeds math-pop trio make their first Cork appearance) and Temperance Parade along for the ride. All proceeds will be donated to Cork's Simon Community.