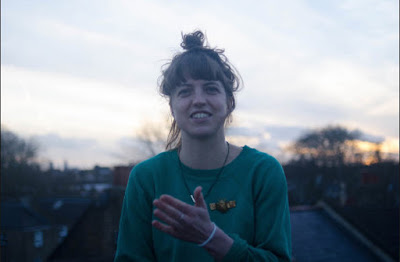 “Last year I did 150 shows! That’s quite a lot, huh?” A conversation with Rozi Plain is a mile-a-minute dash, consistently punctuated with hearty laughs drawn from a seemingly bottomless well of enthusiasm. As with her live shows, it’s almost impossible to come away from an encounter with the London-based musician and not feel like things are going to be okay. In transit as we speak, Rozi is making her way back from Bristol to Big Ben-land following “a couple of weeks recording with This Is The Kit”, Rozi’s other band and fellow frequenters of Cork. “I really like being able to do both,” crackles Rozi down the phone when asked about the complications of playing with two bands simultaneously. “Although very different, for me it’s definitely helpful. I get a bit stressed or worried at my own shows and I don’t get that at This Is The Kit gigs as the responsibility is not solely on me but I really enjoy doing my own stuff. I feel like they are symbiotic, one helps the other. I learn things from both and I like doing both.”

It was with This Is The Kit that Rozi revisited Reykjavik recently, returning to play the internationally renowned Iceland Airwaves, the music festival that earned Plain so many plaudits following a 2015 appearance. “We played in Iceland last year, and that was so amazing. We went back this year with This Is The Kit but I had a really bad infection in my foot so I was in the hospital all the time,” laughs Rozi, unswayed by the whole event. Although she does react to the growing concern in my voice. ”Don’t worry, it’s fine! My ankle is a tiny bit sore. It swelled up to three times its normal size and I was on a drip for three days, so I suppose it was a bit alarming. It’s fine now though.”

By this stage Rozi has left the chugging cacophony of the train, to enter the bustling streets of London itself. The background squeal of the train tracks has been replaced by an irate pneumatic drill which surprisingly leads us to the next topic of conversation: manual labour. “I used to paint boats in Bristol and I worked with a carpenter for a while. I love doing stuff with my hands and generally just being outside. In fact, a couple of days ago I found myself saying to someone that all I ever wanted to do with my whole life was to sit outside on the step!” I backtrack a bit. Painting boats? “It does sound slightly more romantic than it was because it was just sanding off manky noxious paint...and then painting on noxious paint. It was really great work, in a boatbuilding yard in Bristol that built these traditional boats. Loads of really amazing people worked there. I really liked that but sanding is horrible, so unbelievably horrible.”

The love for hands-on activities resurfaces when asked about the first time an instrument fell into her grasp. “I bought a guitar when I was 13 off a friend of my brother’s. It was really crap and really hard to play. It hurt my hand and was not very pleasant at all. So, when I was fifteen I made a guitar myself when I did work experience in this guitar shop in Bristol. Everyone had to do work experience in school so I made an electric guitar. That was my first proper instrument. I didn’t play it for ages though, I just made it and wasn’t bothered with it for years.”

Cork first fell for Rozi Plain when the Winchester songwriter opened for This Is The Kit in Coughlan's Bar in December 2014. The scheduled support for the night had cancelled last minute, so Plain popped up, mostly performing songs that would feature on breakthrough third studio album, Friend. Plain would be back in February 2016 with the full band in tow playing to a few hundred Corkonians as part of DIY festival, Quarter Block Party. Reflecting on 2016 as a whole, it’s clear things are going in the right direction. “The last couple of years since the album came out have been really busy and really fun and cool. It’s been great to do tonnes of shows especially when you have a run with the same people and you can lock into what you do. I change band members so much and have so many people playing with me that it changes all the time so it’s nice when you have the same people for a while and get super into it. Now that I will be at home a little bit more I will be able to work on some new stuff and hopefully we’ll start doing some recording next year.”

For more on Rozi Plain visit: