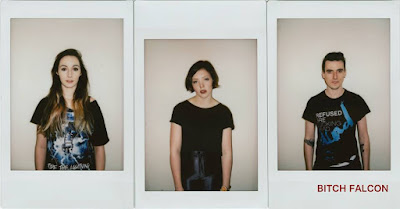 Bitch Falcon pick the tunes ahead of Cork visit...

Bitch Falcon come to Cork this weekend to test just how solid the foundations of Cyprus Avenue and Connolly's actually are. They've also picked a few must-hear tunes to get us in the mood.


1. Á la Fin by Halo Maud
Lizzie: I discovered this French band on The Line Of Best Fit one day while randomly browsing. I have been addicted to all of their tracks, which there are very few. I think maybe because it's all in a language I am very poor at, I can get lost in it very easily. Walking anywhere has now doubled in time, as I generally have to play this twice anytime I listen to it.

2. Blood On Me by Sampha
Lizzie: This song is such a banger, I have been staring at the screen trying to describe it without sounding like a leaving cert essay.Just go listen to it, It's one to be screamed with.

3. Wardrobe by Jambinai
Nigel: Got this on a Spotify Discover playlist a month or two ago and have fallen in love with this band since. Tweeted about it the day i heard them and someone told me they played at the same time as us on a different stage at Body & Soul last year so that was bloody devastating. They just released a new album a few days ago so that was on heavy rotation today. It's really dark, hefty and weird as fuck with all the Korean trad instruments over it. FFO Tool, Kila - WHAT?!

4. Like No Other by Fehdah
Nigel: Fehdah (formerly "Feather") easily released the best Irish song of 2016. The arrangement in this song is fascinating to me and I cannot get enough of it. I just can't get my head around how she so wonderfully transformed a ballad (is it even a ballad?!) into a Jon Hopkins track by the end and it at no point does it sound out of place. So catchy, the production is perfect and I'm just in love with it. Can't wait to hear more new stuff from her!

5. 8 (circle) by Bon Iver
Naomi: At the risk of being a bit obvious, choosing such a well-known artist.... I can't deny how floored I am by the new Bon Iver album. The whole thing is like a beautiful therapy session. The instrumentation, production and narrative in this track in particular just gets me every time. Really hope I get to catch it live at some point!

WIN TICKETS!
To stand a chance of winning two tickets to Cyprus Avenue, all you have to do is like the official G-Man Facebook page and then follow it up by popping a quick mail to comps@thegmanworld.com containing :

For more on Bitch Falcon visit: