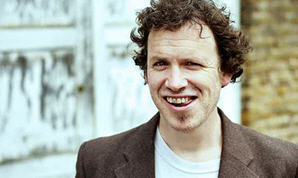 The G-Man talks new releases, an Irish colossus and collecting sounds with Mayo songwriter Seamus Fogarty ahead of his first album release on Domino.

The last time Seamus Fogarty released a full length studio record he was tackling a mountain with an acoustic guitar. This time around he’s eulogizing giants with a box full of electronic treats on new album The Curious Hand. Having since signed to the Domino Music stable, the Mayo man joins an impressive collection of talent comprising Hot Chip, Julia Holter, and compatriot Conor O’Brien’s Villagers. Speaking from his house in Walthamstow, he spins an illuminating version of how he managed to end up a part of the Domino melting pot.

“Once I finished the album, I uploaded the mixes and starting sending them to a few friends and music types to see what they reckoned I should do with them,” says Fogarty, a little groggy having successfully launched the new record at Old Queen’s Head in Islington the night before. “Before I knew it I was sitting on the Domino private jet, drinking champagne and signing contracts. Some of that is a lie but I’m not saying which part! Honestly though, they’re brilliant; a big label but all about the tunes.” To be part of a label brimming with ideas must be inspiring. Has he considered collaborating with any Domino artists? “All of them! I think we could do a really disturbing version of Do They Know Its Christmas.”

The further addition of found sounds and computerized elements accentuate Fogarty’s core strength: songwriting. This ability to pluck a song that seems like it’s been around forever from the air is most evident on Short Ballad for a Long Man. “A visit to the Hunterian museum in London was the first step,” he continues, elaborating on the ballad’s origin. “It’s a weird museum full of various things floating around in formaldehyde and then in the middle there’s the seven and a half foot skeleton of Charles Byrne: ‘The Irish Giant’. I felt sorry for Charles; he’d a tough life - his great height was the result of a then undiscovered growth disorder, known today as acromegaly - and then he ends up in a museum full of human brains and eyeballs. In the meantime, my pal James Yorkston sent me a few chords and asked me if I could get anything out of them and that was just the excuse I needed to tackle Charles’ story. While I’m no giant, there were elements of his story that I could identify with which also helped.”


Now that he’s uncovered it in song, the unearthed story of Charles Byrne - who would achieve celebrity status, inspiring a hit London stage show - is difficult to shake off. No matter how big he was he had no say over where he would lay in the end. Does the tune ever make Fogarty ponder his own mortality? “It probably says a lot about me that I actually find that song quite uplifting although I think that’s more down to the musical elements, the clarinets, the Hammond organ etc. Now that I think of it the demo was actually super depressing! But yes, I tend to focus on the fact that he went for it, as opposed to whether he succeeded or failed.”

Speaking of embracing opportunity, Fogarty contributed an array of animated characters to the recent music video for Heels Over Head, who also feature on the album cover. “When it comes to artwork, I’m a complete chancer!” he laughs, not one for taking much credit. “I’ve done the artwork for all of my albums and EPs but it’s generally a complete accident, which is something that happens in my music a lot too so maybe that’s why it works. For this release, I sat down and doodled my way through the album and the songs and these became the cover.”

From expressing how much he enjoyed working with Welsh director Kieran Evans (who came to prominence with the acclaimed Vashti Bunyan documentary, From Here to Before) and having previously played a live set complete with visuals as part of the Cork Film Festival a few moons back, Fogarty has an obvious affection for the visual arts. “I actually soundtracked a film for Swiss director Claudius Gentinetta a couple of years back and flew over to the Cork Film Festival to see it and play. That was a great buzz and a great festival to be involved with too. More of this kind thing!”

Bringing it back to what he does best before the conversation concludes, I have to ask about some of the curious beats and tones on the record. An avid audio collector, what samples has Fogarty caught in his butterfly net for the album? “There are a lot of sounds on here that I’m very proud of: drums processed by my MS20 until they sound like pigeons; recordings of conversations with my neighbours back in Mayo; a piano graveyard in Gloucester; but the shouting competition in Kilkishen, County Clare is probably my finest hour.”