Posted by The G-Man on April 20, 2012
"I do owe HMV’s window-cleaner quite a considerable personal favour."
Leeside's favourite folk-funk quartet Trumpets of Jericho blew a packed Pavilion away recently with an exhilarating performance of songs from impressive debut record - Songs Like An Alum Ut Its Nor Really. It is always a pleasure to chat with a young band at the top of their game so the excitement was mounting as I awaited an interview with Tom and co. Imagine my surprise - and jaw-slapping shock - when I was greeted instead by the foursome's enigmatic, larger-than-life manager: the inimitable Perry Benthos.

The Benthos Records multimedia magnate opened up quite candidly to The G-Man, especially surprising after the recent fall-out from O.G. magazine's investigation into the business baron's "questionable practices". Continue reading to indulge in Benthos' answers to my "spiceless questions" as the brain behind TRUM-O-CHO's recent success eagerly divulged his "knowledge" of R2D2 Day. That was not a typo.

What is your favourite record store and where is it located?
It’s a small, homely little space tucked away in Paul Street (Cork City), fondly known in the locality, I believe, as Tess & Co’s music store; Or something to that effect. Tess is a lovely old lady who has been running the place with her considerably large family for the last decade or so. I think the shop used to be called Quinn’s Worth before she married, ‘Quinn’ being her maiden name, and the music was certainly worth going in for back then too!

But yes, it simply is a lovely little store – I caught many a gem hiding amongst its immaculately kept stainless-steel shelves over the years.

Are there any specific happy memories that you have of this store?
A good question, which in turn begets a good response. I remember once that –

Are there any particular albums recommended to you by record store staff that have influenced your music over the years?
Not so fast man – give me a chance to respond! HAHA!

But to answer this particular question: no. In fact I do not listen to recommendations by others as a rule, usually finding my own to be far more useful. I have learned a considerable amount in my time in this business and I’ll be damned if I’m going to take any amount of advice from some snot-nosed hack (no offence) or music-warehouse employee about what music I could or should listen to.

Recommendations should trickle from the top down, like icing dribbling down to the lower echelons of a moist sponge cake. I am that icing; behold my drip.

Has a record store helped you in your career path in anyway over the years?
Like the question you just asked me a moment ago, nope: not the case. Although I do owe HMV’s window-cleaner quite a considerable personal favour, for reasons best not go into over a live interview.

Well, alright, since you pushed me I’ll –

What does Record Store Day mean for you?
It means –

This will be the fifth annual record store day. Any fond memories from previous Record Store Days you would like to share?
Slow down – let me finish answering for God’s sake! But no: no fond memories, unfortunately. 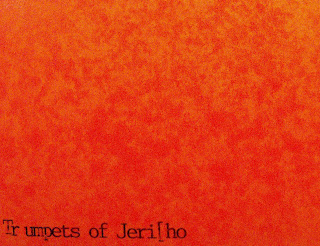 Have you had a chance to look at the special limited editions that are set to be released especially for RSD12?
As disclosed on the Fecebook, Benthos Records staff are hard at work sellotaping all unsold TRUM-O-CHO Alums (sic) - i.e. most of them - to as much vinyl as can be found (which at time of writing is just eighteen of the thirty-one disks from Jeff Wayne's War of the Worlds).

Said product will be valued at collector's prices.

Did you hear Feist and Mastodon are to release a split 7" with Feist covering Mastodon and vice versa?
I literally have no idea what that means.

If you had to describe the perfect record store in 3 words what would they be?
Young, charming, handsome.

If you were to own a record store one day, what would you call it?
Benthos’s Records

Anything else to add?
Of course!

- Record Store Day 2012 takes place on Saturday, 21st April
- 'Songs Like An Alum Ut Its Nor Really' by Trumpets of Jerciho is available from Plugd Records or bandcamp