Fresh from a name change, Chris from Terror Pop (formerly Agitate The Gravel) chats to The G-Man about his favourite indy record store.

Are there any specific happy memories that you have of this store?
Recently I was at a gig inside the store itself with Terriers and Bouts and that was fantastic. My favourite has to be going in after seeing a band in Fred Zeppelins a few years go named Indian Jewelery. They were a US band who made a strange blend of psych out rock, drone and electro with everyone swapping instruments and going mad (no kit, just a tom). Anyway, I wander in to Plugd a week later to see if they have any of their stuff and sure enough they do. I wasn't even sure if I had the right band name so Jim threw on two of their albums so I could figure out which one I wanted, which wouldn't happen in any other store in Cork. It's that kind of consideration and respect that's sorely lacking in every day life, not to mention the world of retail. 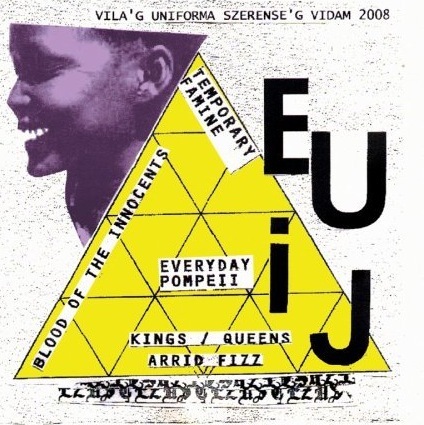 Are there any particular albums recommended to you by record store staff that have influenced your music over the years (or that you have simply loved and adored)?
The album I mentioned buying above (named Free Gold) was the one that Jim recommended and the one I went home with that day. It was a real ear-opener as far as mixing feedback, noise and other non musical elements into songs goes. Also getting my fanboy Richter Collective goodies in there was always cause for celebrations like the first BATS album and The Vinny Club.

Has a record store (i.e. the staff) helped you in your musical career/path in anyway over the years?
We were informed after the Ones to Watch Festival in Whelan's at the start of the year that it was Albert (from Plugd) who suggested us which was a huge deal to us as the gig led to some big developments within the band. It was also a big honour as we were amongst some of our favourite Cork bands at that gig.

What does Record Store Day mean for you?
It's a reminder that there are still people out there who are interested in buying music and supporting artists. A rare breed but one that is beloved.

This will be the fifth annual record store day. Any fond memories from previous Record Store Days you would like to share?
Blur releasing their first full lineup track ('Fools Day') in about 10 years. I got into Blur about 7 years ago and went to see one of the reunion gigs at Hyde Park so as a die-hard fanatic the prospect of hearing a newly recorded Blur song was a giddy thrill to say the least.


Have you had a chance to look at the special limited editions that are set to be released especially for RSD12? Is there any record you will be trying to claim come April 21st?
Possibly the Ryan Adams release but DEFINITELY the Devo live in Seattle in '81. To hear them live at that point in their career, not yet subdued by the crass electro sheen of the mid to late 80s would be great. Did you hear Feist and Mastodon are to release a split 7" with Feist covering Mastodon and vice versa?
It's sort of like if your mother and father swapped clothes for a day. It's humourous at first, then maybe a bit interesting but at the end of the day you can't think of a way to finish the analogy. Stuff like that is often made to stir some kind of mild shock value into the music press but it may not make for great music.

If you were to release a split 7" with any contemporary artist/band who would it be with and what song would you cover of theirs and vice versa?
Because I've been listening to them today: Crystal Castle's 'Celestica' and I would have them cover a song of ours called 'All She Does'.

If you had to describe the perfect record store in 3 words what would they be?
Plugd Records Cork.

If you were to own a record store one day, what would you call it?
"I was in a huge rock band in the 90s and all I could afford was this lousy record store."

Anything else to add?
Take a chance on something you've never heard of before and avoid The Cure.