Twisted Pepper-based record store Elastic Witch are responsible for yet another super billing this week with indie-poppers We Are Losers and Runaround Kids both set for a visit to the TP complex on Middle Abbey Street. The two are currently bracing themselves for a mini-tour of Ireland with tonight's show the first headliner from We Are Losers in quite a while. Axis Of and Gascan Ruckus are upstairs in Whelan's tonight too so quite a nice selection on hand for a rainy Wednesday.

Other shenanigans afoot this week include party-starters the Hot 8 Brass Band in The Sugar Club (Thursday), Gavin Redmond's Twin Terrace upstairs Whelan's (Friday), ex-Prayer Boat leader himself Emmet Tinley in the same venue on the following night (Saturday) while it's back to the Twisted Pepper that same night Glimmermen.

Football makes Sunday a ghost-town live music wise and just a reminder for the broken hearted out there that Mastodon will not be anywhere near The Academy or Ireland in general due to their cancellation of Tuesday's appearance. Why not pop into Doyle's for The Ruby Sessions and see what's what.


Thursday, June 28th
- Bressie in The Academy
- Luka Bloom in the Button Factory
- Pearse McLoughlin in The Grand Social
- Suzanne Walsh This Time Tomorrow I Sang in The Joinery
- The Yips and Color//Sound in the Odessa Club
- Valentine Black, Kevin Casey and more in Whelan's
- Diana Jones in Whelan's (Upstairs)
- Hot 8 Brass Band in The Sugar Club 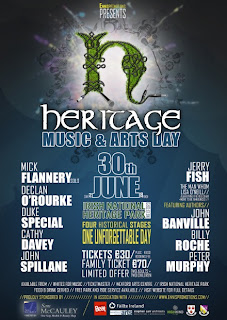 It's the wet and windy northwest versus the sunny (relatively speaking) south-east outside of Ireland's two main cities; Donegal's Sea Sessions returns for another year with a bill headed by British big-hitters Happy Mondays, Kaiser Chiefs and plenty more besides whilst it's a maiden voyage for Wexford's one day Heritage Music & Arts get together whose line-up remains more in line with her roots with Mick Flannery, Cathy Davey and more set to soundcheck at stages that are at least hundreds of years old as historical sites play host to a feast of musical visitors.

Before that though I strongly recommend Galway's Citóg tomorrow night (Thursday) who will provide a platform for the excellent Yawning Chasm's latest EP Butterfly and Crab, the second instalment of four scheduled for 2012.


*Yep you've guessed it, I forget lots! Feel free to leave a comment below to add gigs to the guide.