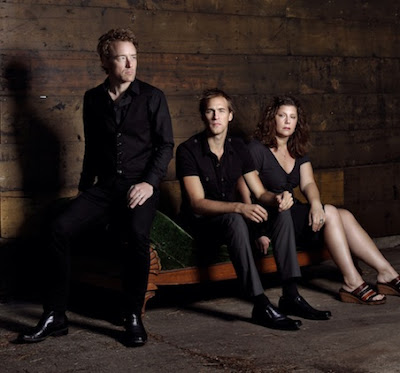 Sweaty. Speechless. Shaken. Low live do such things to a person. And it was no different in Cyprus Avenue on a sweltering mid-Summer's evening. The night wasn't all about the Minnesota masters though...

Rising stars Saint Yorda show improvement every time they take their gothic surfpop to the stage. Last night on Caroline Street the sonically salubrious Leeside quartet took off in a gear previously unheard by these eager ears, tastefully - and diligently - blending new material with old. The as-yet-unreleased tracks (including a 50s throwback that could slip straight into Marvin Berry & the Starlighters's Enchantment Under the Sea dance setlist) allow the more downtempo compositions - such as the exponentially infectious 'Manta Ray' - to flourish; Case in point Paul O'Reilly's soaring vocals on the wonderful 'Yr Bones'. Kevin, Paul, Roz and Chris (in this heat, wisely unmasked behind the drumkit) found their road and direction a few months back and are now beginning to collectively force the foot down on the pedal. It's an adventure on which I will gladly follow. Judging by the crowd's comments and reaction, I am not the only one...

Worth noting at this point is the fact that tonight's venue is a sell-out, no mean feat at a time when the vicious sickness that is feet-dragging has become seriously contagious. It took a while for the last adventurous ticket to exuberantly escape the jaws of the printer but faith has been restored in the gig-going public. In fairness though, Low in Cork, what a coup and it is the slow burn of 'Pissing' - complete with bubbling, underlying fury - that introduces Cyprus Avenue to tonight's main attraction. Clad all in black with minimal set-up (Mimi Parker gracefully hovers over just two drums, tom and snare, accompanied by two cymbals), the Duluthians do not really bother with small talk: "You guys look really good, you always do. This time especially good. Thanks for coming out, I hope you're week goes great" pretty much exhausts Alan Sparhawk and co.'s chatter quota for the evening before reeling a rapt front row into a Great Destroyer double-header introduction, tail-ended by the marvellous 'Monkey' accurately foretelling "Tonight you will be mine" with Mr. Sparhawk stretching the capabilities of the silver vintage Gibson Les Paul slung menacingly about the frontman's coiled frame.

In ninety minutes or so, Mimi, Alan and Steve (Garrington - bass) march relentlessly through the lengthy Low back catalogue seamlessly intertwining new and old with shiny jewels from the recent C'Mon fit to grace the older, more world-weary crowns that are 2007's Drums And Guns 1994 debut I Could Live In Hope. The abrasive unstoppable forward-barge of 'Witches' - in all its violent recollectiveness - raises as large a cheer as any of the "classics" with Mimi effortlessly taking the lead vocal reins on the extraordinary 'Especially Me', a throbbing lament to the lost.


"'Cause if we knew where we belong
There'd be no doubt where we're from
But as it stands, we don't have a clue
Especially me and probably you"

Following a squealing Gibson intro, Nothing But Heart begins to swell. And swell and swell, as the Minnesotan trio provide a masterclass in discipline, building to a climactic crescendo to end all crescendos as Low's fearless leader makes his case for the inclusion of his photo in the dictionary beside the definition of "visceral". Representation for Things We Lost in the Fire has been non-existent so far so the pulsating opening chords of 'Sunflower' appear as if emerging like a shadow from some glorious mist upon an ethereal lake. Never has the Sparhawk twin-vocal sounded sweeter. 'Dinosaur Act' also raises its prehistoric head, bone-crunching guitars and as-anthemic-as-Low-get chorus driving the threesome towards the end of their spellbinding set.

As if the performance couldn't be more special, an encore of "proper" oldies - sandwiching a completely new and untitled composition - seals what must go down as one of 2012's best. In Cork at least.

Stream the entire setlist using the youtube player below.