The G-Man interview: Seti The First 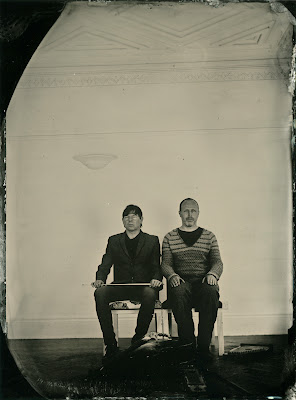 "Defenestration is basically lobbing someone out of a window as a form of punishment. There is a kind of grizzly comic cruelty about it which appealed to us which undoubtedly speaks volumes for our warped sense of amusement."
Egyptian deities and grisly murders are but two of the interests that bond experienced experimental musicians Kevin Murphy and Thomas Haugh, the visionaries behind one of the most intriguing musical collaborations to manifest itself in Ireland in years. The duo, aka orchestral string slingers Seti The First, trot into town on Thursday evening, trigger fingers a-twitchin’ for their first ever showdown in Cork City. Cellist Kevin Murphy blows some of the dust off of the various mysteries surrounding the band including the origin of that distinctive title.

Why not stream Melting Cavalry by Seti The First while reading the interview? Simply click play on the player below.

The G-Man: First things first: how did you come up with the name Seti the First?
Kevin/Seti The First: Myself and my wife Laura were on holidays in Berlin and aimlessly wandering around the Egyptian museum when we came across this Seti The First character – an ancient Pharaoh. The name immediately jumped out at me. It evoked a kind of solid otherworldliness which appealed to me. It appears that Seti spent much of his time developing architectural vanity projects to honour himself which made me think that if he lived now he would be in a band, and probably an experimental instrumental band at that. There is also an organization which looks for signs of alien life called Seti The First - another crowd searching for the otherworldly. We have had some contact from people who have mistaken us for them – maybe with messages from the other side.

How did it come to be that you and Thomas Haugh decided to work together?
We had done some work together on Thomas's solo project Hulk. Sometimes we would end up playing together on someone else's music. We were doing a gig with a mutual friend and, during the sound-check, Thomas heard me messing around with a few ideas on the cello. He suggested that we should develop these into a record…which indeed we did.

Melting the Cavalry is a cello-driven instrumental record. On paper that suggests lush orchestration yet, what strikes me about the record is that, there is a distinct direction and edge - even a menace - to the majority of the tracks akin to Dirty Three. Was this intentional?
The Dirty Three comparisons are probably valid in that we do try to put as much edge into the mix as possible. While the music draws melodically on influences such as Arvo Part, John Tavener, Steve Reich and that lot, the basic template is simple and primal. We are trying to achieve a type of hypnotic and sometimes aggressive folk music. Therefore our approach is intended to be less cerebral and more emotional.


When entering the studio initially, was there a specific theme that you set out to capture?
We are beginning our second record at the moment and there is definitely a more defined thematic approach to that. However, to be honest with Melting Cavalry, it was our first record and we probably didn’t really have a particular, clearly defined conceptual essence, which we tried to capture. We were, in fairness, making it up as we went along. There were certainly things we didn’t want. For example we specifically didn't want it to be music for film in that we wanted to challenge ourselves to produce instrumental music that stood up on its own.

Also, while we were happy that ethnic influences may sneak in and out , we felt strongly that the only folk music that we were going to write was a kind of folk music that hadn’t been written before. As I said already, the only rough sign posts we were following pointed to emotion, rawness and originality if possible. Hopefully we at least gave a passing nod to these aspirations. Beyond that I wouldn’t say there was much of a worked out conceptual framework.

Taking three songs from the record, describe the inspiration behind each composition.
'Bassinette Noir' is inspired by Patrick Suskind's book Perfume and its hero Grenouille, who is devoid both of scent and conscience. The more frantic parts of the tune refer to Grenouille’s dark manic fixations while the more blissed out musical sections are intended to reflect the ecstatic feelings he experiences when killing. It is therefore designed to be a musical echo of a pretty dark tale celebrating the seductiveness of an inert conscience.

'Victory Motel' is intended as a moral antidote to 'Bassinette Noir'. It is inspired by the film LA Confidential from James Elroy’s novel. Ed Exley and Bud White take on the endemic corruption in the LAPD and the climactic shootout scene goes down at the Victory Motel. The dramatic brass canon at the end of the tune is supposed to symbolize personal sacrifice for the collective triumphing over self-interest.

We have a tune called 'The Defenestration of Yan Masaryk' and to be honest were just fascinated with the idea of defenestration. It is basically lobbing someone out of a window as a form of punishment and there is a kind of grizzly comic cruelty about it, which appealed to us. This undoubtedly speaks volumes for our warped sense of amusement. Yan Masaryk received this unpleasant fate in 1948 in Prague, probably killed by the Communist Party he opposed.

How pleased are you with the reception received by the record to date?
We have been extremely pleased with the reception so far. We both felt happy with the quality of the record but it's impossible to know how others will view it. It has been particularly well received in Lyric FM. In particular John Kelly plays it a lot and this has created a lot of attention for us for which we are extremely grateful.

Furthermore, the Danish band Efterklang have contacted us to say that they are fans and have included our track Victory Motel on a mixtape they produced for music magazine Under The Radar. This mixtape included some of their own songs so it was a major thrill for us to be in such exalted company. We are big fans of Efterklang needless to say. Mark Carey, a music journalist from Cork contacted me the morning it was posted online. We were pretty much over the moon about it.

One of the good things about setting out on an adventure like this is that when you get news like that, its like being a kid at Christmas. Also in one of their emails to us they mentioned that the reception they received recently at the Opera House in Cork was one of the best they had ever experienced.

Technically this is your debut record but, with the vast experienced accumulated over the years, in what way do you feel better equipped to deal with the business than, say, a completely new band?
I don’t really know to tell you the truth. I had been out of the music business for the best part of ten years and in some ways I am in reality a bit of a ‘new hand’. I believe that this is actually the source of considerable strength as much of the cynicism which had infected me when I was a musician in the past has largely evaporated and been replaced by an irrepressible, almost exhausting sense of optimism.

However, it’s fair to say that I had been sketching and experimenting away all the time while also collaborating with other people so I suppose all that experience went into the record. Similarly Thomas had been producing solo records as Hulk and working with others, therefore bringing that experience to bear.

How much creative input did you have into the recently released video for 'Sisters of the Red Diamond' and 'New Brass Bird' before that?
There is also a video for our tune 'La Bassinette Noir' made by Adrian Crowley, so three in total. In all three cases, the directors in question took the initiative and so we had no direct input into the process. However, in the future the plan would be to be co-creators in any videos.


Geography can shape a person’s perspective, especially in how they produce art. Would you agree? How do you feel where you grew up has influenced your create output?
Linking musical output to non-musical influences is always a tricky business I think, especially when your music (as in our case) has no lyrics. It is easy to see a reflection of the Cork world-view or the Cork up-bringing in the lyrics of people such as The Sultans of Ping, John Spillane, Cathal Coughlan, Ger Wolfe or The Frank and Walters. In fact these bands could have come from no-where else.

However, I don’t think it’s as easy to definitively link cultural background directly to artistic output of a purely musical nature. I would like to think that my contribution to STF draws on a sense of relentless defiance, a flexible, albeit sometimes warped sense of reality and an unquenchable sense of destiny, no matter how misguided. These are cultural characteristics I associate with Cork and are characteristics I hope and believe find expression in the music of STF.

Albert Twomey in Plugd Records in Cork shoved your record into my hand, as he does so regularly. The internet is obviously integral to a band’s success these days but how important a role do you feel literal old-fashioned word-of-mouth still plays these days?
For me word of mouth is the most important way of getting to hear new music. I don’t visit blog sites or online magazines and so the only reason I will investigate a band is if it has been recommended to me by someone I know and trust personally. This could of course could include recommendations via social networking. Word of mouth has played a significant part in spreading the word about STF so far, which is just as well as the old PR budget is non-existent!

And finally...looking forward to playing Cork?
Can’t wait. I haven’t played in the new Triskel yet and everyone tells me it’s amazing. As Im from Cork I am personally looking forward to seeing loads of family and friends turning up - thinly veiled threat!

The above extract was taken from an article published in Cork's Evening Echo on Thursday, 1st November

For more on Seti The First visit: