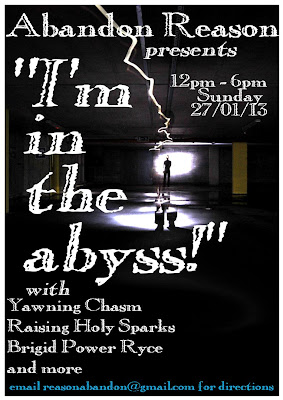 "We're going deeper underground!" Four floors down to be precise...

From recording radio sessions from beneath to releasing records from the deep, Galwegian indie label Abandon Reason has been busy in the early months of its short existence. Sunday afternoon in the carpark will see the fledgling label host live performances from Raising Holy Sparks, Brigid Power Ryce and G-Man favourites Yawning Chasm (who appeared at a G-Man Presents... showcaseall the way back in August 2012.) will all celebrate the launch of the label's very first release, a 16-track compilation entitled I'm in the abyss​!​. Available that afternoon for €7, the limited edition print-version of the collection of "music, improvisations and field recordings done entirely in the car park" will also include a reworked version of Yawning Chasm's 'Whifling' originally released on 2003's Snarl. Once the 100 copies are sold - expect them to fly - the 16-tracks will become available to download via bandcamp.

For more on Abandon Reason visit: