"We just want people to come in and be excited about shopping in a record store."
Plugd Records
1st Floor, Triskel Arts Centre, Tobin Street, Cork
Website: www.facebook.com/plugd
Contact details: +353(0)21427 6300 or plugdrecords@gmail.com
This Saturday, Plugd Records, the shimmering jewel in Cork’s alternative crown, will again participate in record store day proceedings, a gathering now internationally-renowned by avid record collectors and casual music fans alike. As ever, local legends Albert Twomey and Jim Horgan will be overseeing the counter chaos on the big day. Genuinely, Cork’s vibrant local music scene would simply be lost without them and it’s difficult - and awful - to imagine a Cork music scene without them. Thankfully, Albert has no such intentions to make that nightmare a reality.

The G-Man: April 20th 2013 will mark the sixth annual record store day and indie stores all over the world are still going strong. What does it mean to work in a record store in 2013.
Albert: I cannot really imagine not working in a record store at this stage. I get to talk nonsense and listen to music all day. The social aspect is a massive bonus obviously. Plugd gets lots of interesting folks through the doors and support from the local community over the last decade means a lot to Jim and I.

What were the highlights from the past year in Plugd Records?
Getting to collaborate on shows with folks like The G-Man Blog [Seamus Fogarty/John Blek show back in February], Black Sun, Fractured Air and Alliance has been brilliant.

Plugd has been going quite a while now. What do you feel sets your store apart from the rest?
I would like to think folks feel comfortable shopping, just browsing or wandering in for a chat.

In January HMV closed its doors in Ireland with many closures in the UK to follow yet independent record stores such as yourselves and Tower (Dublin) live on. Why do think that is?
Well for a start our stock levels and overheads are significantly more manageable. We also cater for a more specialist market. We do get some extra traffic in since the closure of HMV though.

Surprisingly, independent record stores have not only been surviving but new shops have opened their doors in recent times such as Elastic Witch in Dublin and various Wingnuts. What kind of camaraderie would you have with the various stores?
I know Gib from Elastic Witch and Ray from Wingnut from various adventures over the past few years. Ray has got his tentacles spread right across the land (Limerick, Athlone, Galway and Waterford) and Elastic Witch are well established in Dublin in a short time. We all got together late last to play records for the Vitaphonic folks during the Cork Film Festival. It was great to hang with those two guys. Mind you they did not hang about to clean my apartment after the after-party...

Whilst working in a stationary shop, a friend of mine once sold pencils to David Gilmour. What famous musicians have visited the store over the years and can you remember what they bought?
Romeo Stodart of The Magic Numbers always wanders in when he is in town and is a a great guy to just hang out for a few hours, always up for chatting about touring, asking about the local scene and enlightening me on who/what soundtracks the tourbus stereo. Sam Amidon would be a regular visitor and popped in recently with his son Arthur.


When on holiday do you like to go snooping around other stores? Excluding your own, what is your favourite record store?
I will tell you when I get there!! I need to get to San Francisco and drag my bones into Aquarius Records. Those folks really have an extraordinary passion for punk rock and share a fascination with all things CIRCLE! Holidays for me usually mean festival fun-times so I do pick up records at Roadburn, ATPs and Supersonic merch tables. 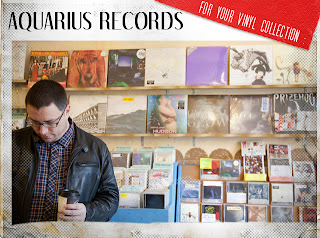 One thing about Plugd I think is great is that you are always keen to introduce people, be they bands, customers etc. to each other. How integral to the music community are local record stores?
Ha! I guess I am just generally nosy and want to see what folks are up to. I have seen some really great relationships begin within the walls of Plugd. It's always rewarding to watch folks throwing ideas around and then starting labels, booking shows and collaborating on music. People have found new homes in Plugd!

What does Record Store Day mean for your store?
Last year was great fun and we had a series of folks playing records in the shop as well as the nice folks at UCC Campus Radio broadcasting live.

What RSD releases will you be trying to slip into the bag before the store opens on April 20th?
Goat - 'Run To Your Mama' remixes EP.


What kind of treats have you got lined up for Record Store Day 2013?
Really looking forward to the Demdike Stare show!!

Having been involved in so much over the years you have seen some crazy shit! What is your favourite rock 'n' roll war story?
I think the most bizarre caper I have been involved with would have been going to see The Lapse in the Lobby Bar on Saturday night and putting together a show for them in Limerick the very next night (after having a drunken chat with Chris Leo). After a few super-excited phone calls we managed to figure out a sound engineer, venue and get some heroes to make posters and fliers. The show had a good turnout and we managed to hook them up with a decent fee.

What do you make of the cynicism surrounding record store day? There’s a worry that good intentions may have been hijacked by corporations.
Well that’'s definitely going to be an issue now where companies are thinking ‘wow we are really going to have to max this opportunity out’ where before they wouldn’t have had a massive amount of time for the independents as the numbers wouldn’t really have stacked up for them. HMV would have been a massive portion of business for all the major suppliers but we always had a really good relationship with distribution companies such as PIAS particularly, Domino, Drag City, XL, Secretly Canadian, Thrill Jockey. They’re the kind of titles we love and have been stocking for years. They are the labels that actually represent us in a big way. Claude and Alison of PIAS have been brilliant supporters over the years. I think some of the major companies are now more interested in dealing with us and other independent shops like Wingnut. Plugd are trying to increase the customer order business which obviously we are getting a bit more custom from that as people are using us to try find different titles.

Larger companies are going to try squeeze a little more but that’s business. We know what the bigger companies are like in all sides of business, it’s not just rock and roll. Some of the smaller labels have complained that year on year they are keeping the pressing plants busy but coming up to record store day they can’t get in for a key title or any kind of title for that matter as there is a big backlog and the pressing plants are under pressure to get titles ready and back into production and the smaller labels are put to the back of the queue which is obviously a problem. Also there is an upsurge in vinyl sales - something like biggest increase since '96 - vinyls are a core part of business to us so I think they are going to see us through.

It’s become a bit of a civil war has it not? With one side downloading and the purists remaining with or reverting back to vinyl. CDs in general are being lost aren’t they?
It’s a lot more throwaway I guess. People who want to buy music will find a way, some people are just not interested in paying for music but let’s not be concerned with that. Obviously you stream some stuff and get people interested, if people want pay then they’ll pick it up on cd, vinyl or whatever or cassette which is a format we haven’t come to yet. We sell tonnes of cassettes at the moment! A few new labels started up recently. For example Fort Evil Fruit last year is a great seller for us. We sell lots of the titles, the artwork is always really good. Really interesting taste from noise to organic sounds such as Aine O’Dwyer and it’s great to see. Fallow Field Records started a label with two titles and they sold through. I think the thing to do is make it more attractive to the punter.

Do Plugd get many members of the next generation in through the doors?
We get a lot of younger customers in these days investigating their folks’ records that are left lying around. A lot of kids have started checking out the records in the attic and investigating. Due to the way things are in general these days, kids are probably not going out as much as they used to so they are checking out the parents’ vinyl and starting their own record collections. We had folks in yesterday and the mother was at the Nirvana show [in Sir Henry’s] and was teary eyed as the daughter bought the Nirvana box-set. Which is good to see. Maybe families are going to get closer through all this!

It’s great to hear kids are still getting into vinyl and alternative music in a more organic way rather than spending hours and hours on the internet.
Yeah it is great. We’re in a situation in the Triskel Arts Centre [where Plugd is located] where there are now a lot of different reasons to come into the building: the cinema, the café, the TDC. People wandering in are surprised we ware still there. We’re still here! I don’t know what to tell you, maybe it doesn't stack up in any economical way but we've had tough times where obviously we were closed for a while, we were working out of an office, we even had a pop up stall working out of the Realt Dearg and we were really glad that those guys took us in. We were obviously very close to shutting down which is not good news for me or Jim but we saw it through.

I suppose we are trying to be more careful with things now with costings and decent orders: it’s actually really hard to get the range of ordering right as we have such a spread of custom right now. Electronic, house, techno, general independent stuff that sells through for us on vinyl and cd. Some of the bigger titles on the major labels such as Nick Cave, Foals.

Has it been tough in the past to get such titles?
Before it would have been more difficult as the bigger distribution companies simply wouldn’t have had much interest in dealing with us. Talking to Ray from Wingnut  the bigger distribution companies were very eager to deal with him which before would have only been pennies to them but now pennies matter... Since HMV closed in Limerick - where I began working in music retail - Wingnut's pop-up shop in Videodrome started to get in bigger titles using a customer order system. It will take a while for the relationship to grow but that’s great. It’s difficult but there still is opportunity there

So what would signify a successful record store day for Plugd?
I don’t want chaos exactly but we just want people to come in and be excited about shopping in a record store.


For more on Plugd Records visit: