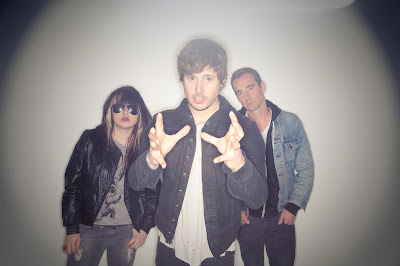 Dearly B deal the tunes...

Canadian suzz-punks Dearly Beloved rounded off their U.K. tour recently with Rob Higgins and Niva Chow set to revisit Irish shores later this week in promotion of latest record Hawk vs. Pigeon following a successful showing earlier in the year during Indie Week Ireland . Before they resume doing what they do best, Rob played curator for the latest edition of Listen Up.

Anthony Bourdain - 'No Reservations'
A little insight into the hang at Rancho de la Luna and area, home - where we recorded Hawk VS Pigeon and the upcoming Enduro. Home studio of Dave Catching.

Fear - 'New York's Alright If You Like Saxophones'
It's the raw energy - it's beloved SNL players letting go and going off; participating in the moment with the band. It's the band. It's his voice. It's the collective teetering on the brink.

The Dead Weather - 'Treat Me Like Your Mother'
Cool as fuck. Trading gunfire and spitting lyrics.

Sigur Ros - 'Untitled One'
Directed by Floria Sigismondi, a fellow Canadian.
It's a post-apocalyptic world where Sigur Ros create a soundscape where children don gas masks to play outside. Proud to say I worked on that project (--the chairman).

UNKLE - 'Rabbit in Your Headlights'
Classic. Kind of a metaphor for life - even if you get hit you just gotta get up and keep going.
Tenacity and determination amidst chaos.

The Police - 'Can't Stand Losing You'
Just when you think it's over they bust into a ripping version of 'Next to You'. Raw, fast and hard..straight up.What else can I say? Other than...Copeland's drumming.

American Nightmare - 'I Saved Latin'
In a mere 40 seconds this video says more than most full length features. Whether in the spoken word monologue or the intensity of the band's live performance or even in the shear sonic fury delivered by former Boston natives American Nightmare. This video speaks volumes. Literally, metaphorically, audibly.

Paul Hellyer - 'UFO Alien Disclosure'
Phil Schneider - 'Documentary'
Just imagine if any of this is true … why would all these senior government officials jeopardize their own credibility and respected careers to come out and say such things?!? Yet most people would rather talk about twerking.


Stream Dearly Beloved's playlist in full by clicking play below:


For more on Dearly Beloved visit: