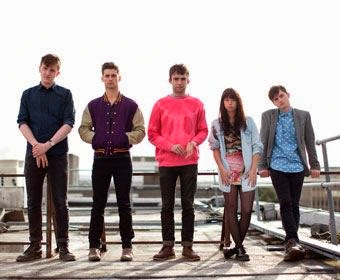 The Big Apple, Choice and Jimmy Fallon. Otherwise an average year in the life of Little Green Cars...

“It’s been a good year”, admits Stevie Appleby, one fifth of Dublin’s Little Green Cars whose good year just so happens to include a number one album, a slot at one of the world’s most famous music festivals, a live appearance on Jimmy Fallon’s late night talk-show and most recently, a Choice Music Prize nomination. It is the spirited folk-pop pomp displayed on maiden full-length Absolute Zero that has resulted in more doors and windows being flung open for the young quintet than the average Paranormal Activity sequel. With so much hype building about the band, mostly due to numerous tent-filling festival escapades, Stevie and co. claiming top spot on the Irish charts immediately upon release mustn’t have come of that much of a shock.

“It really did take us by surprise”, assures Stevie, still a little bewildered by his band’s rocket-like ascent into the stratosphere. “It’s really strange but also a really nice feeling because we put a lot of work and a lot of ourselves into the record. It getting the recognition that it got was a really nice experience: to open yourself up to people like that and for them to accept you. We were so nervous about the first album that knowing people liked it has alleviated a lot of stress about the second. The only thing that we ever wanted was a long term thing not just a spurt on the charts. We wanted the time to develop musically and make this our living but it’s nice to know that people like you.”


Having signed to U.S. independent label Glassnote Records (Mumford & Sons, Two Door Cinema Club, CHVRCHES), Little Green Cars have been granted opportunities across the Atlantic that wouldn’t typically be an option for most Irish/English artists at such an early stage in their career, one being a chance to show what they can do in front of millions of viewers courtesy of Jimmy Fallon’s late night talk-show. Be it fright, adrenaline or outright shock, Stevie’s memory of the night is a little fuzzy. “The only thing I remember is walking out onto the stage and then walking off again. I honestly can’t remember playing the song at all. It was a weird experience.“

Playing a set at Lollapalooza, to mere thousands rather than millions was surely a smoother ride. Not so, it seems. “Faye [O’Rourke - singer] lost her voice that morning. It was such an odd experience to be sitting backstage at such a big festival like that and doing our utmost to try and piece together our setlist of what we were able to sing without Faye and what we couldn’t. Then out of nowhere this golf buggy arrives to bring us to the arena and when it arrived it felt like the opening scene of Saving Private Ryan with us all running towards the stage amidst all this confusion. We were all terrified! By the end of the set, Faye’s steroid injection that she had received earlier kicked in so she was able to sing and it ended up being great. Actually, it ended up being one of the best gigs of the tour as the audience got behind us so much.”

Although now well-travelled and accustomed to the rigours of the road, it’s warming to hear that Stevie and his young cohorts in chart-assailing crime’s innocence hasn’t been swiped from them just yet, especially when it comes to the excitement of seeing the world, most notably the Big Apple. “It was my first time over there and being able to see New York - now that was completely insane. So much of what I’d read and seen in movies and books, it all happens in New York and to be able to stand in the same spots...the smoke coming out of the grate...for me that was a real kick. I just feel like a completely different person in New York.”

Referring back to the recent Choice Music Prize nomination and the healthy state of the current Irish music scene, Stevie reaffirms his title of king of the understatement. “My Bloody Valentine, Villagers, Lisa O’Neill: the past year in music speaks for itself. It’s been a good year.” A good year indeed. For Little Green Cars, a little better than most.


The above interview was published in Cork's Evening Echo on 13th March 2014.

- Little Green Cars play Cork Opera House on Friday, 14th March
- Tickets are priced from €20 and available from www.corkoperahouse.ie
- To read an interview from 2011 with LGC click here