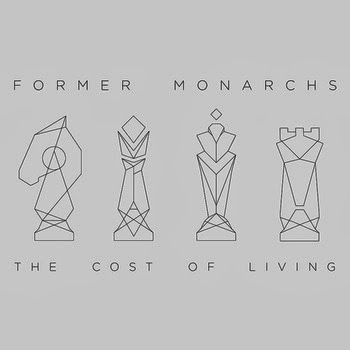 "If you listen really closely at 1:48-2:11 you'll hear Barry panting like a dog. Beware though, once you hear it, it can't be unheard."
Former Monarchs talk The Cost of Living...

Speed is not always a virtue, an apt statement when referring to the length of time it has taken for Cork foursome Former Monarchs to release their very first album. And it's an approach that has paid dividends in the long run the the shape of the shimmering white-vinyl package that is The Cost of Living. Labelled "Ones to watch" by the BBC coming into 2014, Kevin Mulcahy, Jonathan Pearson, Barry Ronayne, Damien O'Brien wisely used earlier EPs and singles (2011's The Wisdom of Crowds, 2012's 'Judd Nelson') to experiment and craft a sound so wonderfully executed on their new Mountains of Records release, complete with added subtleties - especially with the vocals - that maybe didn't exist on previous, slightly more innocent compositions culminating in '1000 Planes', the album's crown jewel.

The quartet were good enough to take time-out from a very busy period for Former Monarchs in order to run us through The Cost of Living track-by-track. For the complete experience, press play on the player below before reading.


01. Origins
Barry: This used to be a much faster and a more “rock” sounding song, which focused on the guitars. When we were recording it we continually stripped away layers from the song, recording the bass lines on an effected guitar and the lads sang the vocal lines much quieter and lower than usual, which gave the song a very cool ethereal quality.

I was living in Paris when the vocals were recorded, so I first heard the vocals when everything was mixed together, and it sounded like a completely different song! I spent a few hours walking around Paris with the mix on repeat, I just couldn’t believe it was the same song. It was surreal, in the best way.

Jonathan: My favourite thing about the creation of this song is when we doubled the length of the end part and added the horns. I actually think that’s what makes the track in my opinion. Christian [Best - producer] had a huge part in this song’s vibe. Elastic Sleep's Chris Somers [engineer on the record] also lashed on a bit of tambourine inspiration that is magnificent! The lyrics at the end were written by Kev and are probably my favourite lyrics on the album, with the possible exception of the last track.

Kevin: YouTube videos of Christopher Hitchens, Richard Dawkins and Sam Harris inspired the lyrics in this song. Essentially these men debate religious fundamentalists all over the world on the topics of morality, violence, sexism and how life began. Hence the title of the song.

02. Armour
Barry: I think this is my favourite song on the album. It's probably the hardest song to play from my perspective, and it’s one of the first times we built the majority of the song around the same chord progression. The verses and choruses are the same progression, and we experimented with strumming patterns and dynamics to make the chorus lift. The piano in this song was added while I was away as well, and it brings the end of the song together brilliantly. I can't imagine the song without those piano lines now.

Jonathan: Kev and I used to meet in either my flat at the time (I lived with Daire [formerly of KVX] who played violin on the album) or up at his place working on vocal melodies. We had one for the chorus of this song, but weren't too keen on it. The day I went to record the vocals to the chorus in Chris Somers' studio, myself and Kev said I’d give a different melody a go. All day recording it, and we ended up scrapping it and going back to the original. I'm glad we did now though. I love the end of this track. Not too mad on my vocals at the start even now!

03. Buyer Beware
Barry: This is the oldest song on the album, which we first recorded nearly 4 years ago. The song hasn't actually changed much since then, and it's still one of my favourite songs to play live.

Kevin: This was one of the first songs that the band ever recorded and I think we all wanted to give it another spin for the album. An increased tempo and some extra guitar layers really helped to open the song up.

04. Home
Barry: This song went through loads of different versions in the mix, only to end up being as we originally intended it! The electronics were written by Shane O'Sullivan (Elk, Quiet Pilot), and it really adds a unique flavour to the album. All the effects were made using guitars and a Binson EcoRec 2, an old school delay that Christian Best had just had fixed up. Even when you're not playing anything, the EcoRec creates this beautiful ambience that adds so much to this song. I think the lyrics on this song are my favourite on the album. They're so simple, just reflecting on a perfect moment in time, but they are incredibly poetic. Fair play to the lads.

Jonathan: It took me ages to write these lyrics actually. The fun part was whistling into the mic in Christian's studio pretending to be the wind. Kudos to Shane too who lashed out those electronics. He writes loads of great stuff that people should hear but only I hear it because I live with him and he plays it in his room. Idiot!

Kevin: We had the initial guitar parts for this song written quite early. The song was quite different to the other stuff that we were writing at the time and I think that we very easily could have left it out because it was so different. Very happy we persisted.

05. Birdsong
Barry: This song was a very difficult one to get down correctly. I recorded a lot of my guitar parts using a baritone guitar (much to the lads disdain and amusement), but it just didn't sound right so a lot of the guitar was rewritten on the spot and rerecorded. We added quite a lot to this song down in West Cork over one very long weekend, building up the layers to make this song work. A lot of work, but it was worth it.

Kevin: Twitter inspired the lyrics to this song. A friend of ours had put a story on his page, which was subsequently retweeted by a bigger news outlet, which then became national news. Not being a user I was a little freaked out by the power of it all!

06. Evade
Barry: This song was originally called '2 Minute Rock Song', which I think says it all really! We recorded the guitar using this tiny dirty-sounding beast of a guitar belonging to Christian, you couldn't sound nice on that thing if you tried.

07. Battlelines
Barry: This is another song that took some work to get right, but the work was definitely worth it. We've been imagining the brass section on this song since we first wrote it, and it's fantastic to finally get the opportunity to record them.

Jonathan: Yeah thanks to Darragh Kearns Hayes for composing all these brass parts in the latter half of the album, they really add loads to it. He's another guy who can lash out a load of parts in a day or two no bother.

Kevin: This song is kind of like a 'My Friend Has No Job' [from The Wisdom of Crowds) part II in that it deals with the theme of austerity and hardship, but there's hope in the end.

08. Clans
Barry: Even though the song is nearly 8 minutes long, it was the quickest to record I think. We had been recording the drums in sections, and after a few takes Jon asked if he could just try one take of the song in it's entirety. With the exception of a few bits and pieces, that is the take we ended up using.

Jonathan: No recollection of this being the case.

Barry: Really? It was pretty impressive! We've been playing this song for so long that it's imprinted in our heads, so we hammered through the takes pretty quickly. I don't actually remember how this song was written. We were jamming on a different idea, and when taking a break Kev started playing this tapping line, which the lads started playing along to, and a few hours later this song was done. It remains the most painless writing process w've ever done I'd say.

Jonathan: COOL TIP – If you listen really closely at 1:48-2:11 you'll hear Barry panting like a dog. Beware though, once you hear it, it can't be unheard.

09. Mori
Barry: This was the first song we recorded for the album. I initially recorded the guitars using my standard set up when it was just myself and Christian one afternoon, and as we had a bit of time we tried one or two guitar lines using a few different effects that Christian had. Naturally, we got a bit carried away and ended up rerecording all the guitar lines using his EcoRec. It was a great thing to do, and gave us confidence to play with the sounds for the rest of the album.

Jonathan: The song is about the story of the Haruki Murakami novel Norwegian Wood. Hopefully some of your readers are familiar with it. It's one of my favourite books. It's a tad unfortunate that we couldn’t call it after the novel itself, but The Beatles got there before us! I asked my friend Niamh who lived in Japan what the Japanese word for 'forest' or 'wood' was and she said Mori so that was that.

10. 1,000 Planes
Kevin: Initially myself, Barry and Damien wrote the shell of this song for guitar, bass and piano. We showed it to Jon and he said he had an idea for it. We recorded the shell of the song with Christian and to be honest it sounded terrible, but Jon kept saying to leave it with him. A few happy mistakes later and the song ended up being one of my favourites.

Barry: This song lives and dies by the strings and brass, so we didn't know how the song would turn out until we heard the mix but I really like how it did turn out, really sparse and minimalist.

Jonathan: That cello line way out in front is the kicker for me. Funny thing is that I scored the piece in such a way that the cellist (Sean Warren) actually played his part at double speed. This cello line you hear is a result of that. Another happy mistake, and great playing by him.

11. Machine Halls
Barry: This is the song I'm proudest of on the album. I showed the guitars to the guys the day before we went into the studio and they showed huge confidence in the idea to let me record it. The lyrics and vocal melodies match exactly what I had in my head, but we'd never discussed them previously so I was delighted when I heard them! We wanted to have the song almost devolve into noise and collapse in on itself at the end, until just the vocals remained. I'm really happy with this song, and I think it’s a very cool way to finish the album.

Jonathan: Yep, this is my favourite from a personal perspective. I'm delighted it closes the album.

For more on Former Monarchs visit:


Official Website -- Facebook -- Bandcamp
- The Cost of Living by Former Monarchs is available now from all good record shops
- Alternatively, order online over on formermonarchs.bandcamp.com