The below are my top ten recommended gigs to attend for the leafy month of October for all those camped in the capital. To avoid additional cranium crunching I have ordered the list by date rather than preference as my brain nearly melted during the attempt to reduce the dozens of super shows down to a paltry 10.


1. Echo Lake
When?: Wednesday, 10th October
Where?: The Workman's Club
How much?: €12
Why?: Already conquering the American college charts with debut record Wild Peace, Echo Lake play their first ever Irish show on Wellington Quay hoping to win over a couple of capital critters who enjoy their dreampop. Click here for a recent G-Man interview with the band. Visit echolakeband.com for further details

2. Man Forever, Magic Pockets and School Tour
When?: Thursday, 11th October
Where?: The Joinery (BYOB)
How much?: €10
Why?: To see Oneida drummer John Colpitts/Kid Millions' side project Man Forever performing compositions from third studio album Pansophical Cataract in a superb art space. It's BYOB too! Visit thejoinery.org for further details


3. Squarehead & So Cow
When?: Friday, 12th October
Where?: Button Factory
How much?: €5
Why?: To see Squarehead do their glorious indie-rock thing. Never fail to be anything but brilliant.


4. Myles Manley & The Little People and Trumpets of Jericho
When?: Wednesday, 17th October
Where?: Whelan's
How much?: €7
Why?: Trumpets of Jericho are one of the most exciting new bands (check out their recent live session for RTE here) to come out of Ireland in recent years. Throw mad-man Manley into the mix and you know fireworks will be lit.

5. Catscars, Woven Skull, I Heart the Monster Hero and Skinny Wolves DJs
When?: Friday, 19th October
Where?: Subground 43
How much?: €10
Why?: Another interesting venue, another BYOB event just laying there, waiting to be taken advantage of. Off the wall but brilliant line-up is simply the icing on the cake.


7. The Tallest Man On Earth
When?: Wednesday, 24th October
Where?: Vicar Street
How much?: €25
Why?: No one does high-octane folk better than Kristian Matsson. The Swedish songwriter (aka The Tallest Man On Earth) announced his arrival to the wider world with 2010's impressive The Wild Hunt, a lesson in how to get the balance between passionate acoustic bashing and delicate delivery just right.

8. Django Django
When?: Saturday, 27th October
Where?: Button Factory
How much?: €16
Why?: Well they were nominated for a Mercury Music Award so they must be doing something right. Body & Soul-goers may (or may not) remember their type of tribal pop.


9. Beach House
When?: Sunday, 28th October
Where?: Vicar Street
How much?: €23
Why?: Beach House bamboozle me. They don't really do anything - and I mean anything - live but play their instruments but boy is it one hell of a show. I suppose pump enough lighting and great tunes into the audience and all will fall into place. Vicar Street being the location for the night promises something special.


10. Sparks
When?: Monday, 29th October
Where?: Button Factory
How much?: €35
Why?: The Button Factory has a tasty little line-up this month with nothing served as juicy as Sparks who play their first ever Irish headline date. Iconic, seminal, inflential, ground-breaking. All these words sound as impressive as they are apt. 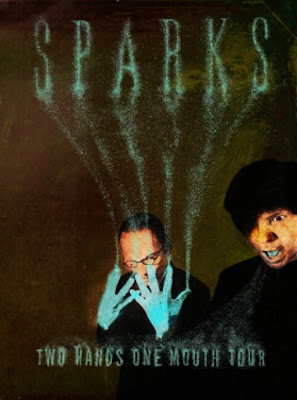