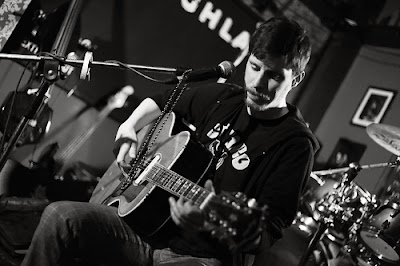 RFOB to release on AFB...

Barely days after ripping up the floorboards as part of an ever-incendiary Ten Past Seven set in Cork's Crane Lane, Rory Francis O'Brien and Leeside-based DIY label Art For Blind have confirmed the 7:10 guitarist will release his first solo material on the independent label. Recorded live in legendary Parliament Street venue Fred Zeppelins earlier in the year and featuring atmospherics provided by Rory's long-time partner in crime James Fortune, The Eve of the Ides of March will feature eight tracks and is currently available to pre-order over on bandcamp. Having appeared on The Cork Music Show and featured on the bill for The G-Man Presents... #3, this blog is a big fan of the Kerry-rocker-turned-maritime-lovin'-folkie. Stream preview track 'Burning White Dove' using the player below.