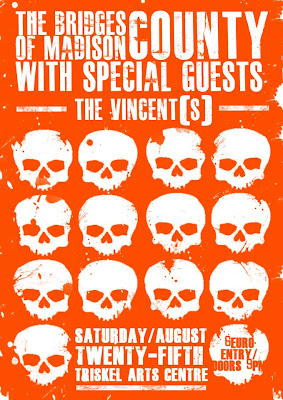 The live music front is slightly quieter this week in Cork but there are still a couple of gems on show including the appearance of the living legend that is Peter Hook.
Sadly tickets are available via a raffle only so plenty of genuine fans may miss out on the former New Order/Joy Division man's Beamish & Crawford Brewery site performance. Support comes from local boys Dead School who have shifted their line-up around in recent times so expect a different sound than heard previously. That same night will see the Cork leg of Cafe Irlandaise take place in The Pavilion, who maintain their consistent run of FREE Saturday night gigs.

Completing the Saturday night shenanigans are The Bridges of Madison County in the Triskel TDC with support provided by Cork's favourite cross-dressing conquistadors, The Vincents.

COMPETITION!
To stand a chance of winning a couple of tickets to Orchestra of Spheres in The Half Moon Theatre, Cork on Friday 31st August, all you have to do is send an email to comps@thegmanworld.com containing :
- a subject of 'Ping Pong Spheres'
- your full name
- your mobile number
- if you could invent an instrument what would it's name be and what would it sound like
The winner will be announced on Wednesday, 29th August. Closing date is 11.59pm (or 23.59) on Tuesday, 28th August.

Elsewhere, Drogheda's The Curtain Thieves continue a hell of an expansive Irish tour with a late show in The Crane Lane Theatre, Sive are down in Clonakilty for a Sitting Room Session (both Wednesday), The Grunts continue their Roundy residency (Friday) and The Hard Ground play an in-store in Crowley's Music Centre on MacCurtain Street (Saturday at 5pm).

Sunday is busier than usual with the continuation of the Murphy's nights but keep an eye out for this one: Si Schroeder - the creator of 2006's Choice Music Prize-nominated Coping Mechanisms - in The Bowery for absolutely FREE. That is not to be missed.

LATE ADDITIONS Hope is Noise and Terriers in An Bróg on Wednesday. Super mid-week gig. And FREE! Also down Myrtleville way The Altered Hours and The Great Balloon Race visit the sandy floors of Pine Lodge, always a quality outing.

Wednesday, 22nd August
- Fireside Sessions with Lynda Cullen in Bradley's of Barrack Street
- Hope Is Noise and Terriers in An Bróg


- The Curtain Thieves and Terror Pop in The Crane Lane Theatre (11.30pm)
- Jawbone in The Pavilion (Bar)
- Sitting Room Session with Sive in De Barra's (Clonakilty)

- Cafe Irlandaise presents Odi, In Valour, Bona Fide Federation and Foxglove in The Pavilion
- The Bridges of Madison County and The Vincents in Triskel TDC