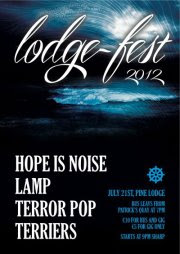 As posted several times in the past few weeks (see here, here and here), Lodgefest 2012 took place last night and boy did it not disappoint.It would not be a surprise if some in attendance at Lodgefest 2012 - which rocked Pine Lodge as hard as the sun blistered beach-goers flesh on Saturday - are just awaking from a boozy slumber but for those who missed the mania in Myrtleville: you really missed out.

From Mini/Ian and Terriers' primal assault on our earholes to Lamp's apocalyptic juggernaught, the legacy of the now infamous Party In The Pines gatherings is in safe hands with over three hours of sweaty, scintillating rock 'n' roll belted out as part of what can only be described as Cork's very own one-day version of Primavera.

The magic in the salty sea-air crackled as Terror Pop unveiled a switchblade-sharp set, cutting deep with the former Agitate The Gravel foursome visibly more comfortable with their new-found, more coherent sound which also included re-energised renditions of "oldies" 'Wilderness Years' and the pop freight-train that is their third single: 'Wait' . It's fair to say Chris, Muireann, Ruairi and Dan have left the hazardous word 'potential' behind them and look set to blow whatever stage that is lucky enough to have them away at Indiependence come the August bank holiday weekend.


Closing the night of course were the ever-inspirational Hope is Noise. They just don't "get" the idea of playing mediocre or even just plain good gigs. Every performance is 100% blood and sweat, non-stop titan tunes which organically replace pulling all in the room their own personal pint of frenzy. 'Official Party Line', 'Two Gods Short of My Trinity', 'Das Ich' were flung at the crowd who themselves served up some of the best crowd-surfing witnessed in quite some time with familiar faces flying by my head at regular intervals. The undeniable camaraderie between all involved was on show in force - with Terriers' Mini gracing the mic on a number of occasions - with the good vibes and pints flowing in equal abundance (and there were quite a lot of pints consumed). Hope is Noise (and Terriers' Mini) deserve bucket-loads of credit for keeping the Party In The Pines adventures alive, with such showcases of local music not just an amazing Summer outing "for the lads and gals" but important: important for up and coming musicians to witness the energy and abilities on show, important to encourage existing bands by what can be done by sheer hard-work and limited budgets on your own doorstep, important for music-lovers to take home memories of a bloody good night, important mainly to remind everyone that we are all in this together. Roll on Lodgefest 2013 so we can do it all over again.